A jailed conman in Austria managed to make thousands of telephone calls to women from his prison cell and beg money for a testicle operation. The 31-year-old fraudster, who was not named for legal reasons, had managed to smuggle mobile telephones into the prison and then used them to defraud wealthy women.

In most cases he targeted elderly women, claiming to be a nephew or grandson who needed an operation on his testicles. He claimed that he had developed a sex obsession and this had caused a semen blockage in his testicles for which he urgently needed an operation. He had already been jailed for the same fraud in 2014, but then continued inside with the smuggled telephones. 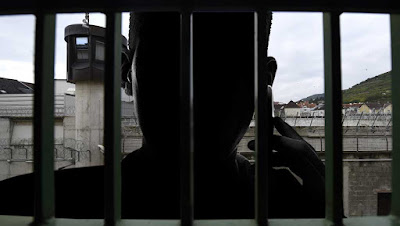 He told the court in Krems in Lower Austria that he would look for women in the telephone book with names like Maria or Anna and had made an estimated 7,500 calls to target his victims. Police said the man apparently had a number of stories, but had settled on the testicle operation as his permanent trademark because it worked so well.

He added: "This embarrassing problem seemed to work the best. I would simply tell them I need an operation, and then tell them what it was about." Judge Monika Fasching-Lattus had asked the convict why had not simply said he had cancer or something simpler, but he said: "This embarrassing problem seems to work much better." He was given an additional three and a half years in jail, and was warned against once again trying the fraud from inside. The sentence is to be added to the six years he already has to serve.
Posted by arbroath at 6:03 am
Email ThisBlogThis!Share to TwitterShare to Facebook