A quiet village left shocked after a spate of burglaries last month have been left baffled and amused by someone leaving giant courgettes on the doorsteps of the houses that were broken into.

In a random act of kindness, a well-wisher has left the over-grown vegetables outside homes in Pontrhydfendigaid, Ceredigion, Wales, that were burgled in a one-night spree. 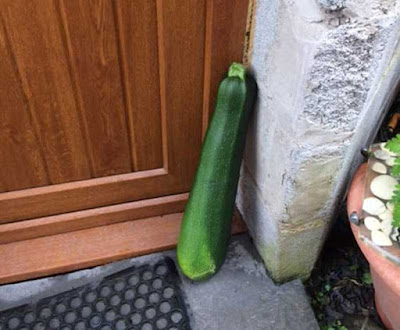 One resident whose house was broken into, Gwenllian Beynon, said: “Somebody has been leaving giant courgettes on their doorsteps without saying who it is. This act of kindness is so nice as there is so much negativity in this world. It makes us feel good after what happened.”

Dyfed-Powys Police are continuing to investigate the burglaries which affected several homes in the village in a spree that lasted from the evening of Tuesday, 28 June, into the early hours of the next day. A man was arrested in connection with the crimes, but it is not yet known if he has been charged.
Posted by arbroath at 6:03 am
Email ThisBlogThis!Share to TwitterShare to Facebook

IN the US, we do this with zucchinis. People don't think it's so nice. I think there's even an official "sneak some zucchini onto your neighbor's porch" day.

Heh heh, I'd never heard about that before.

Thanks for the info, Miss C!

Zucchini grows so fast that you can have nice little ones in the morning, and they'll grow four times that size by nightfall.

Also freaks out the neighborhood cats.