Crime Stoppers of Hunterdon County in New Jersey is offering a $250 reward for information about the disappearance of a giant inflatable duck that went missing after the annual rubber ducky race in Clinton last Sunday. The 5-foot 4-inch tall duck, donated to the Clinton Guild by several of its members, had been sitting on the patio of the Hunterdon Art Museum the week before the race, and members of the Clinton First Aid and Rescue Squad anchored it in the river on race day. 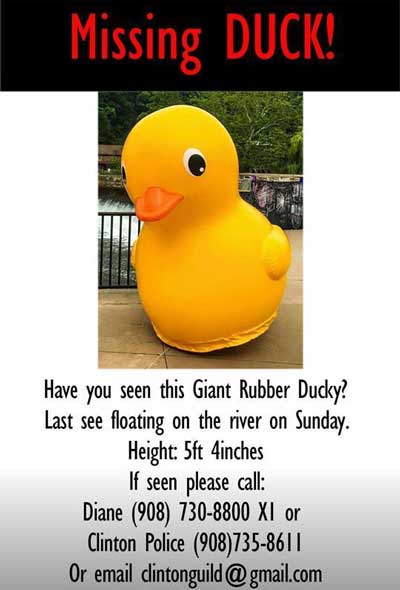 "We thought people would be excited to take pictures of the duck," said Clinton Guild President Diane Crisman-Race. The duck was last seen in the water at around 10pm on Sunday, Crisman-Race said. "We've pinned it down to after 10pm and before 8:20.m on Monday," she said. "Sometime during that time period the duck went missing." She asked the rescue squad members if it was possible the duck got loose and floated away. 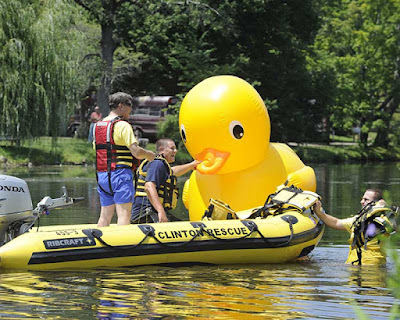 "They're insisting they secured it tightly with lots of knots," she said. "They haven't been back in the water yet to retrieve the anchor and buoy, so we don't know if they can tell it's been cut," she added. It also seems unlikely the duck deflated in place, she said. "We went to the top of the art museum and looked into the river," Crisman-Race said. "The water's clear enough to see through, and it's not there." Guild members fear someone snatched the duck.

"There's a good section of that river you can get to pretty easily," Crisman-Race said. "It's pretty walkable." CrimeStoppers of Hunterdon County is working with Clinton Police to offer the reward, she said. A post on CrimeStoppers' Facebook page says it is "seeking your help in locating or information concerning the disappearance and safe return of the giant Rubber Duck used in last weekend's rubber duck race." Anonymous tips can be submitted by calling Crime Stoppers.
Posted by arbroath at 6:07 am
Email ThisBlogThis!Share to TwitterShare to Facebook