A tall man from Hingham, Massachusetts, wasn't arrested for driving while standing out of his car’s sun roof on Thursday afternoon, but that’s what got the attention of police. Sgt. Steven Dearth said that Ryan Delaney, 20, who's 6 feet 7 inches tall, was charged for driving with a suspended licence, after police got a call from a motorist who reported Delaney’s behaviour.

Dearth said the arrest began when a motorist called shortly before 3:30pm to report “a man standing up in the sun roof” of a Mercury Sable. The caller first noticed the driver and the Mercury less than a mile away, near Rockland, as the car headed north towards Hingham. The caller followed the Mercury into Hingham and stayed on the phone with police until a patrol officer pulled Delaney over into a school parking lot. Dearth said 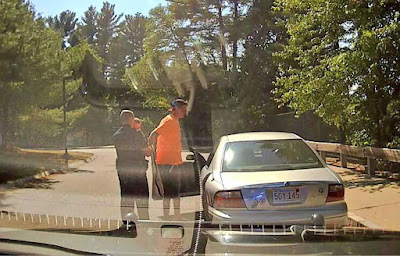 Delaney denied standing up while driving. But a licence check showed that his licence had been suspended for seven “surchargeable offenses,” which include traffic accidents and speeding. The state Registry of Motor Vehicles suspends a licence if a driver accumulates seven such offences within three years. Dearth said Delaney’s female passenger had a valid licence, so she drove the 2005 Mercury from the scene.

He said it’s not clear how Delaney would have steered the car if he had been standing up. Dearth said police couldn’t charge Delaney with driving to endanger since he was reported standing while driving in Rockland, not Hingham. Delaney was released on bail on Thursday but didn’t show up for a Friday arraignment at Hingham District Court - so he now also faces a bench warrant for failure to appear.
Posted by arbroath at 6:06 am
Email ThisBlogThis!Share to TwitterShare to Facebook

well he shouldn't be that hard to find