Campaigners fighting to protect green belt land in a South Tyneside village say their protest is being sabotaged. Keep Cleadon Green campaigners have been using a variety of ways to promote the need for people to speak out against the council’s strategic land review.

The plans have earmarked a number of sites in the village as possible areas of housing developments, much to the anger of residents. As well as leaflet drops, posters have been put up in the area to make people aware of the campaign and scarecrows wearing ‘Keep Cleadon Green’ have been sited throughout the village. 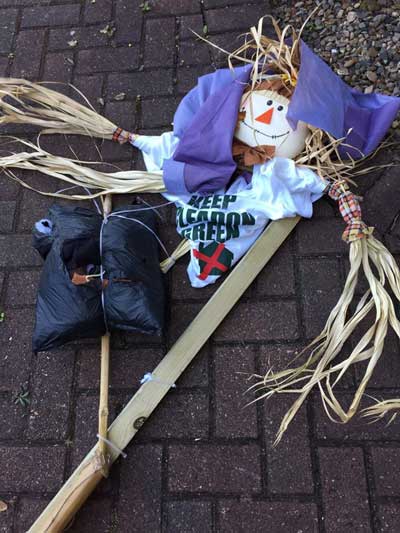 However, campaigners say they have been left angered and disgusted after they have discovered posters have been ripped down and scarecrows attacked. Lead campaigner Surindar Kaur, said: “It’s disgusting. People have been out and just massacred the scarecrows. It’s like someone is trying to sabotage our campaign.”

The ‘Keep Cleadon Green’ campaign was launched to fight against proposed development on green field sites in the village, backed by the three ward councillors. In the past month they have residents support for the campaign has increased tenfold with more than 300 people attending a recent meeting to put questions to the council.
Posted by arbroath at 6:00 am
Email ThisBlogThis!Share to TwitterShare to Facebook