Seal found in cemetery toilet relocated closer to the ocean

A 120-kilogram seal has been released close to the ocean after being caught napping in a cemetery toilet on the north-west coast of Tasmania, Australia. The male Australian fur seal was found asleep in a cubicle in the female toilets at the Mersey Vale Lawn Cemetery in Devonport on Tuesday. 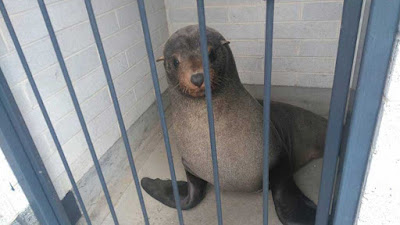 The council's Karina Moore said she initially thought it was a joke when a council works crew emailed her about the seal they dubbed "Sammy". Wildlife biologist Rachel Alderman said Parks and Wildlife officers sedated the seal in the toilet block while they prepared to move it. 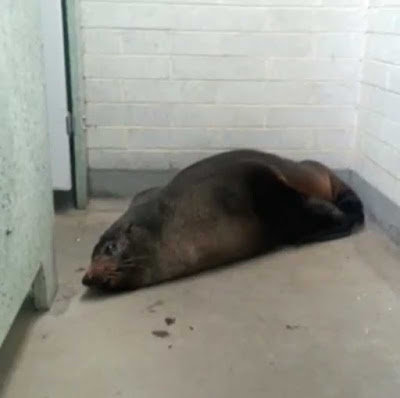 "The officers were able to shut the door to the cubicle and keep it contained, which reduced potential issues for the seal and people, so you couldn't have asked for a better result, really," she said. "We try to intervene as little as possible, but obviously in this case the seal posed a potential risk to itself to get back to the water. It was possibly going to have to cross a road or encounter all sorts of other objects, and also human safety is a concern as well." 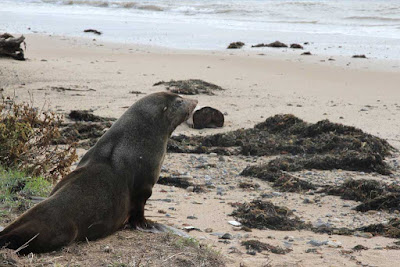 She said the seal probably swam up nearby Horsehead Creek, and it was not unusual for seals to make their way into cities and towns in Tasmania. "They're a really abundant species all around Tasmania, particularly in Bass Strait, and we've had them turn up in Cataract Gorge, paddocks, people's backyards, and now we can add a toilet block in a cemetery to the list." The seal was released at a nearby beach.

There's a video of the seal inside the toilet here.
Posted by arbroath at 6:03 am
Email ThisBlogThis!Share to TwitterShare to Facebook