A turtle found wandering around a busy New York City bus terminal has been reunited with its grateful but sleepy owner.

Two turtles escaped from a bag in the Port Authority Bus Terminal after their owner fell asleep on Sunday afternoon, police said. 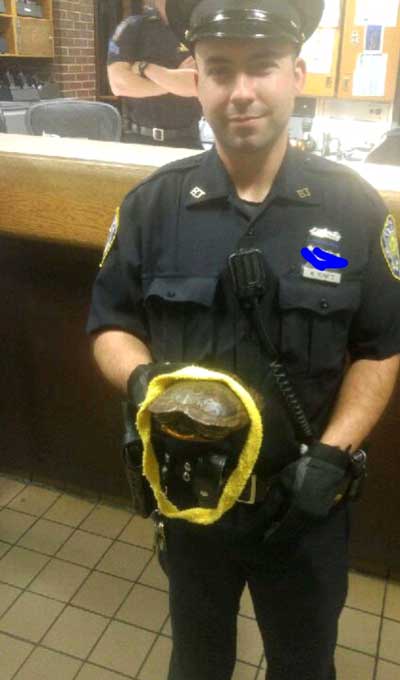 A police officer found one near a parked bus after a dispatcher reported seeing the reptile in the roadway at around 1:30pm, Port Authority spokesman Joe Pentangelo said. Half-an-hour later, police then got word of a second turtle on the loose.

When they arrived at the spot where a witness saw it, the owner had already retrieved the reptile. Police then returned the first escapee to the owner, who said the animals slipped out of a blue shoulder bag while he dozed off. Officers don't know where the man was from or where he was heading.
Posted by arbroath at 6:04 am
Email ThisBlogThis!Share to TwitterShare to Facebook

Glad the turts are back with their caregiver.

They aren't his pets. The officers returned the guys dinner.

I'm sorry the cops didn't make sure the beasts were being properly cared for. Escaping ones are one thing, mine ended up being nicknamed Houdini, but they do need warmth and water.