A case of alleged udder tampering has resulted in an exhibitor being banned from the Great Yorkshire Show.

The incident involved a winning nine-year-old cow entered into the dairy classes at this year’s show, which was stripped of its champion title and the reserve champion was promoted in its place. Show organisers, the Yorkshire Agricultural Society, did not give details of the reason for ban, but it is believed the incident involved enhancing the udders of a dairy cow in breach of show regulations. 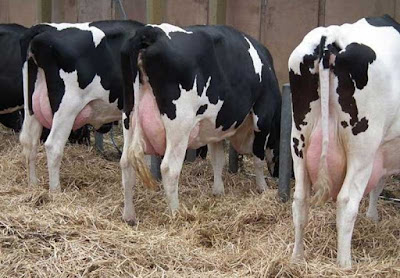 Nigel Pulling, chief executive of the Yorkshire Agricultural Society, confirmed the dairy animal had been disqualified with immediate effect and any other animals entered by the competitor would be unable to compete at the show for a further three years. The exhibitor will be given the right to appeal. "We can confirm that a dairy animal has been disqualified after an incident of tampering which breached the Great Yorkshire Show regulations," he said.

"We take any allegation of tampering very seriously as the welfare of animals is paramount." Such incidents are rare, but not unheard of. A big win at a major agricultural show can increase the value of an animal and its offspring by thousands. Known methods of improving the appearance of cattle for the judges involve pumping up udders with liquid or gas, sealing teats or painting them.
Posted by arbroath at 6:00 am
Email ThisBlogThis!Share to TwitterShare to Facebook

What an udderly dastardly trick. Though I am left wondering how one "enhances" a cow's udders. I guess push-up bras are out.

Okay, that means for beauty contests, no breasts with implants?