The sound of her baby son laughing could be one of the best noises Taryn Blair has heard. Three-month-old Jordan, who was born deaf, had hearing aids fitted on Thursday at Australian Hearing in the Padbury suburb of Perth, Western Australia. Mrs Blair, from Banskia Grove, told of the heartwarming moment baby Jordan heard her voice and that of her husband Damien for the first time. “He loved his rattle sounds. Put a smile on mummy and daddy’s face!” she said. 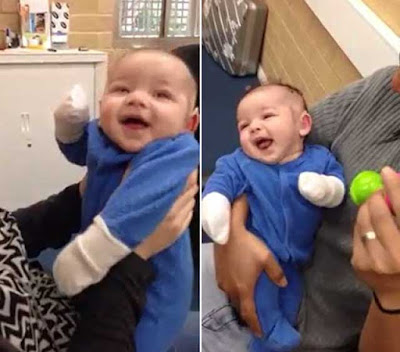 Mrs Blair held Jordan, whose face lit up with a smile when he heard her say hello. Mrs Blair said she wasn’t surprised when she found out Jordan couldn’t hear because hearing loss runs on her side of the family. “He had the newborn hearing screening and failed the first assessment. He had another one a couple of days later and failed again,” she said. “He wouldn’t react to our dog barking or making noises. We have a two-year-old who flinches or cries when he hears those loud noises, so we knew something wasn’t right.”

They were referred to a specialist, but Jordan has also had bronchiolitis and the Rotavirus, as well as being diagnosed with laryngomalacia, or a soft larynx, which have added to the complications of testing and diagnosing him. After a rough start to Jordan’s life, Mrs Blair said seeing his reaction was a huge positive for the family. “We went in there not knowing what to expect. When we had that reaction, we were so happy,” she said.

“We still don’t know how deaf he is, and we won’t know until he has a sedation test in the next couple of weeks. But right now, the volume on the hearing aids is set at moderate to severe. While it has only been just over 24 hours since he got his hearing aids, she’s already seen a change in Jordan’s behaviour. “Normally, he’s hard to put down, I don’t know if it had anything to do with him not being able to see or hear us. But now, when I put him down in the bouncer or in bed, he’s fine and looking around and making noises,” Mrs Blair added.
Posted by arbroath at 6:02 am
Email ThisBlogThis!Share to TwitterShare to Facebook