Toad in a hole rescued by the RSPCA

The RSPCA were called to rescue a toad when he misjudged his girth and became stuck head-first in some garden decking. The chubby amphibian had become stuck when trying to squeeze between two decking panels in a garden on Wednesday. 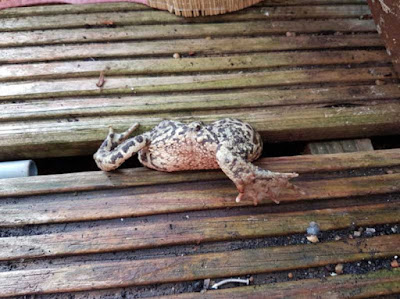 Jason Finch, an inspector for the RSPCA, arrived at the home in Old Lakenham, Norwich. He said: “I was shown to the garden by the homeowners, and it didn’t take me long to spot the little legs sticking out of a gap in the wooden decking, waving around in the air. I knew I had to get the little guy out as soon as possible, he must have been very uncomfortable.” Due to the toad being wedged tightly between the wooden decking, Mr Finch was unable to remove it with his hands. Just then the toad wriggled free and trapped itself underneath the boards. To free it, the homeowners and Mr Finch agreed he needed to saw through the decking and lever it up to ensure the amphibian was safe.

Mr Finch said: ““He was the biggest, fattest toad I have ever seen - I can only think he was after a nice fly or a juicy bug when he decided to stick his head down the gap. I released him near the garden pond, I’d like to say a big thank-you to the homeowner for calling us and letting us do what we needed to in order to rescue the toad, it’s really heart-warming that people are prepared to go the extra mile to help our wildlife.”
Posted by arbroath at 6:00 am
Email ThisBlogThis!Share to TwitterShare to Facebook