An odd metre-and-a-half long semi-circular cycle lane has been installed at a junction in Chilwell, Nottingham. Jamie Ireland, from nearby cycling store The Cycle Inn, said: "I think random is the right word. 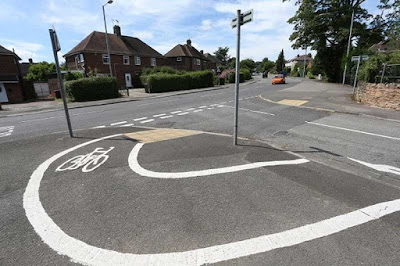 "You've got a cycle and pedestrian path, then finally you get a clearly defined cycle path and it doesn't seem to make any sense. It's absolutely ludicrous. People might be doing 25 mph on the road and then suddenly they've got to flick onto the pavement and make a sharp turn. 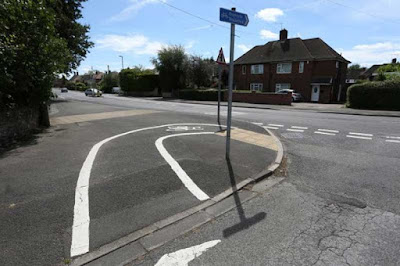 "I'd imagine most people ignore it." Local resident Keith Chong said the road is often used by cyclists trying to avoid a busier nearby road. He said: "It's a bit silly really, but people do use it. When there are markings there people will follow them. 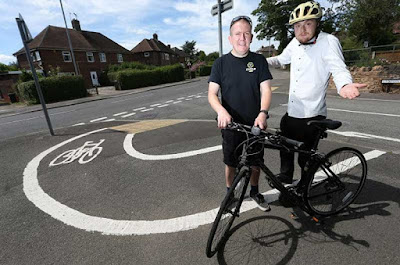 "It takes you back around like a dog tail. It sort of makes sense if you're turning right, but not if you're turning left." Both Broxtowe Borough Council and Nottinghamshire County Council have been contacted, but have so far offered no explanation.
Posted by arbroath at 6:01 am
Email ThisBlogThis!Share to TwitterShare to Facebook