Couple arrested for throwing rocks at each other

Police arrested a man and a woman for throwing rocks during an argument outside a grocery store in Bartlesville, Oklahoma, on Monday morning. According to a police affidavit, officers were called about a disturbance at about 11:30am. 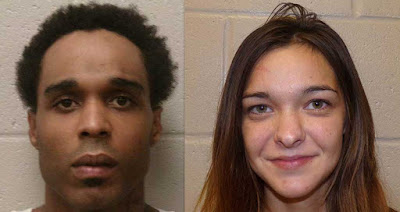 Thornbrugh said she had been following Spirlin in the parking lot, "trying to get him back to her vehicle, so she could take him to Tulsa," and had thrown a rock at him, but missed. According to the affidavit, as she walked away, Thornbrugh said Spirlin picked up the rock and threw it back at her.

Washington County prosecutors charged Deauntre Spirlin with assault and battery with a deadly weapon and domestic abuse. They charged Jenna Thornbrugh with domestic abuse. Spirlin has a court appearance set for August 19 and Thornbrugh a court appearance set for August 31.
Posted by arbroath at 6:07 am
Email ThisBlogThis!Share to TwitterShare to Facebook

It's so nice that they share the same interest.