Sitting in a redwood tree, drinking beer, a man from Santa Rosa, California, fell from about 70 feet, before landing face down in his backyard, according to authorities.

Firefighters headed to east Santa Rosa after getting multiple calls at about 3:30pm on Sunday about a man high in a 100‑foot redwood tree drinking beer and then for a man who’d fallen from that same tree. Fire Capt. Jack Thomas had initially been forming a plan for the difficult job of getting the man out of the tree. 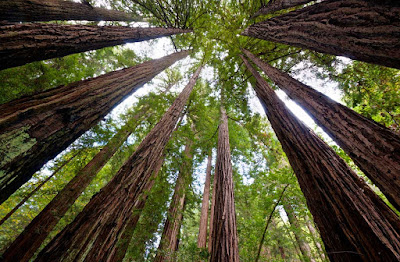 His options were the city’s aerial fire truck or seeking help from the Sonoma County sheriff’s helicopter. Some neighbours were unaware he’d fallen and pointed arriving firefighters towards the top of the tree. Firefighters, unable to spot him, then looked into his yard where they found him on the ground. It wasn’t clear why the man was so high in the tree.

“He was hanging out, from what we were told,” said Thomas. “He fell in some form or fashion, bounced off of all the limbs all the way down.” Firefighters and paramedics began medical aid and inside his pockets found unbroken, empty Corona beer bottles. The semi‑conscious, injured man was taken by ambulance to Santa Rosa Memorial Hospital and later transferred to another facility for treatment.
Posted by arbroath at 6:06 am
Email ThisBlogThis!Share to TwitterShare to Facebook

Sadly there's no treatment for being an idiot, it's incurable.

Yeah, Ron White was spot on when he said, "You can't fix stupid".