A man turned his flyboard into a fire extinguisher by hovering over a burning boat on a Minnesota lake on Saturday. At around 3pm on Cross Lake, Paul Gavic saw a boat on fire from his nearby dock and called for his son, Jesse Gavic. 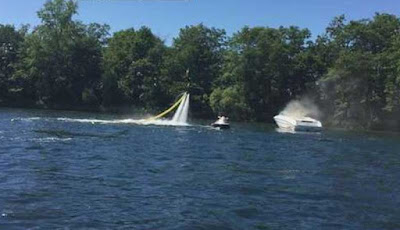 Jesse strapped into his flyboard, attached to a personal watercraft driven by brother Caleb Gavic, and headed for the burning boat. After reaching the boat, it only took about two minutes for Jesse to extinguish the fire using the water propelled from his board. 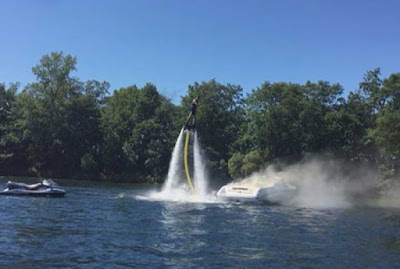 The people on the boat jumped out and were picked up by a pontoon. No one was injured. A skyboard is essentially a pair of boots connected by hose to a jet ski or other personal watercraft. The propulsion from the boots can lift someone 50 to 55 feet in the air. 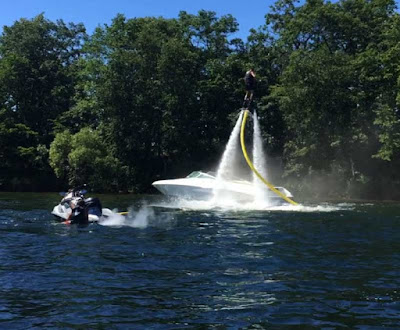 They had approached the boat’s owners before taking action. “We went over and said, ‘Hey, is that your boat?’ and they said yeah and we said, ‘Do you mind if we put it out?'” Paul Gavic said. The fire department arrived shortly after Jesse put the fire out.

You can watch the video here. There's an additional news video here.
Posted by arbroath at 6:07 am
Email ThisBlogThis!Share to TwitterShare to Facebook

Hehe, do you mind if we put it out. So awesome

Cool. Feel free to put it out, as long as you didn't sink it in the process of filling it with water.


What’s up, yeah this post is truly nice and I have learned lot of things from it concerning blogging. thanks.

I like the valuable info you provide in your articles. I will bookmark your blog and check again here frequently.

As I website possessor I believe the articles here is very excellent, thanks for your efforts.