A Florida man faces charges after police say he used his pick-up truck in a fit of revenge to rip up the front lawn of a person who posted negative reviews about his wife's animal clinic business.

Joshua Ryan Fields, 35, from Palm Bay, was charged with criminal mischief after Palm Bay Police were called out last Tuesday to a home to investigate reports of a person rolling into a yard at night in a black Ford truck and spinning out large ruts through the grass. Police estimated the damage to the yard from the late night incident to be at least $300. Fields was taken into custody for questioning and later released with a court date. 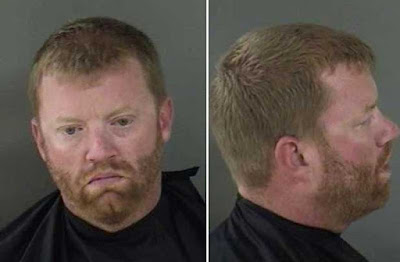 The witness told police she was home sleeping when she was awakened by bright light shining through her windows. She then looked outside and saw the pick-up rev up its engine and then spin its rear tyres in her grass. The truck’s driver repeated the action several times, rolling in and out of the yard. She told officers that she had recently posted negative reviews on a Palm Bay animal clinic’s website and thought that yard incident might be connected.

Officers located Fields at his home and determined he was the owner of the pick-up truck and the husband of the animal clinic owner. After initially denying the woman’s claim and telling officers to “get … out of my house,” he was arrested. He then told officers that, acting on his own, he sought revenge against the victim because she posted several negative reviews about his wife’s animal clinic. He then admitted that he was wrong.
Posted by arbroath at 6:06 am
Email ThisBlogThis!Share to TwitterShare to Facebook

Tip to the vet: You're supposed to treat the pit bulls, not marry them.

Anonymous, you do pit bulls an injustice.