Man arrested for drunk driving on his lawnmower

A man from Massillon, Ohio, was arrested for driving while drunk on his lawnmower on Friday. According to Ohio DUI laws, the man will face a misdemeanor even though it was his sixth DUI charge. 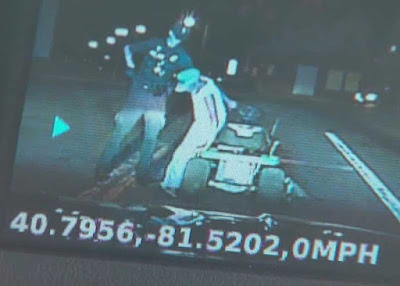 At around 9:30pm Massillon police saw the man stalled on his lawnmower. When the officer asked the man to walk to the patrol car he couldn't and the officer had to hold the man up.

The suspect's name has not been released, but Massillon police said that his blood alcohol level was three times the legal limit. The man also had a suspended licence and told officers that was why he was on his lawnmower.

I don't think it's possible to turn off the subtitles on this video.

The man will only get a misdemeanor charge because his six DUI offences fall within a span greater than 20 years. If it was a span shorter than 20 years, he would have faced felony charges.
Posted by arbroath at 6:07 am
Email ThisBlogThis!Share to TwitterShare to Facebook

Some might think this is silly or a waste of resources, but I think he should be punished like any other person irresponsible enough to get a DUI. The way that I look at this is if my daughter was driving her car and she came up on this idiot around a curve and hit or killed him, she would be on the hook.