A man has told how an attack by a “demon” cat left him requiring hospital treatment. Darren Scott was waiting for an ice cream van to come past his home in Invergowrie, west of Dundee, Scotland, when the cat approached him. The 24-year-old told how the feline was apparently encouraging him to stroke it, but then bit him on the arm. Describing the incident, he said: “I was just standing waiting for the ice cream van to come along. 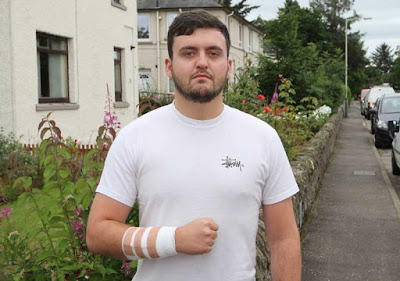 “The cat came up and started rubbing itself against my leg. It was acting like it was all nice and friendly. It was not a cat I had ever seen in the area before. I bent down and put my hand out but suddenly the cat jumped up and bit right into my arm. It was like a demon. It bit me and then just took off. It was really sore. I just was not expecting it because the cat had seemed so friendly to start with.”

Darren said he had to go for treatment to Ninewell’s Hospital’s A&E department. Doctors there told Darren that they were concerned the wound might become infected and he would have to go back to the hospital again for another check-up. He said: “I had two big puncture wounds on my arm from where the cat bit me. I needed to get paper stitches. I also have another appointment to have the wound checked out to make sure that it does not get infected. 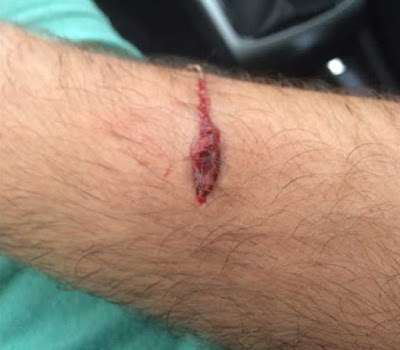 “Apparently cat bites are really bad for infections because their mouths are full of bacteria.” He also said the attack left him with swelling to his arm. Darren added: “The doctors told me that they do not usually see people who have been bitten by a cat. I posted details of the incident on a community page and apparently there have been other people attacked by the same cat. I have been told that people have contacted the owners about it but they don’t seem to care.”
Posted by arbroath at 6:00 am
Email ThisBlogThis!Share to TwitterShare to Facebook

On the other hand--

I have an 8-yr-old pale orange tabby who's the sweetest little guy you'd ever want to hold and love. Still, about twice a year he kinda forgets where he is and who I am and just bites--for no reason. Bizarre.

I was babysitting my granddaughter's kitten, and she got me with one of those super sharp kitten teeth while we were playing. I didn't pay much attention to it, but it got infected, and I had to go to the ER for intravenous antibiotics. I even had to fill out a bite form. I explained that she didn't bite me.we were just playing. Oh, well.