Owl moved on by police after blocking road

An owl was moved on by police after being found sitting in the middle of a road in Berkshire.

Officers on the night shift dealt with the bird after it was found in the middle of a road in Bracknell. 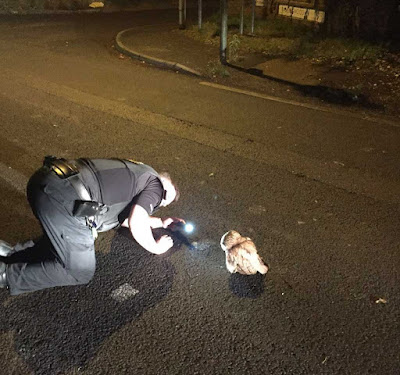 "Officers had a hoot last night removing this offender from obstructing a highway," Thames Valley Police said. The bird was "responsive and uninjured" and was moved to a safe place on advice from the RSPCA.

"After some initial resistance and failure to comply, PC Justin Barton took him under his wing and showed him to the side of the road to carry on his journey," police said.
Posted by arbroath at 6:01 am
Email ThisBlogThis!Share to TwitterShare to Facebook