In what he calls one of the strangest experiences of his life, Elliot Fuller of Germantown in Washington County, Wisconsin, and his friend Jason Franklin stumbled across an unusual sight while canoeing last Thursday. 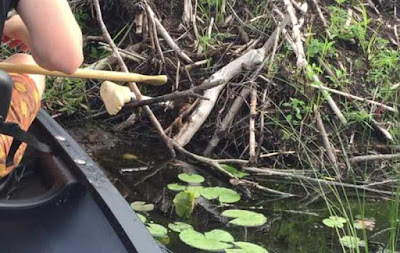 They were travelling down a creek that runs between Richardson Lake and Zarling Lake near Wabeno in Forest County when they stumbled upon a prosthetic leg sticking out of a beaver dam. "I was sure we had found a dead body that someone dumped into the creek," Fuller said. "We thought it was real at first until we got a closer look." The two men went online and found that someone had posted on Craigslist 20 days ago looking for a lost prosthetic leg. 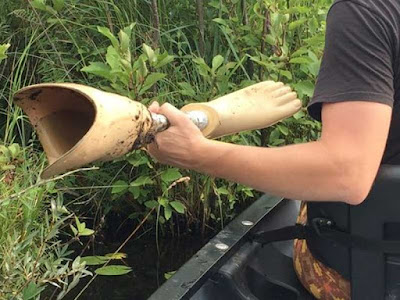 Mark Warner, 49, of Green Bay lost his prosthetic leg on a fishing trip when his canoe flipped over on Range Line Lake in Wabeno. He managed to get his fishing gear and cooler, but the prosthetic leg got away from him. "I wasn't overly worried about it because I use my older model for fishing and hunting," Warner said. "It wasn't my everyday leg, to put it that way." Warner's friend persuaded him to put an ad on Craigslist a few days after he lost it.

"I just thought it was gone," Warner said. "I really didn't expect to see it again. On my end, it's pretty amazing and it's pretty bizarre where it ended up." Fuller and Franklin found it about three miles from where Warner had lost it. They contacted Warner and returned the leg on Friday. They received a $50 reward for returning the lost limb. "Just did what I thought was right," Franklin said. "I hope that if I lost my leg that someone would return it to me, too."
Posted by arbroath at 6:06 am
Email ThisBlogThis!Share to TwitterShare to Facebook