RIP Puffin the parrot who has fallen off his perch

Puffin the Cockatiel is sadly no more. "The oldest, angriest, chip eating, finger biting Cockatiel of Port Chalmers, has finally fallen from his perch - Good mate to Marko," an obituary published in the Otago Daily Times in New Zealand earlier this week read. The notice put in by the niece and nephew of Mark 'Marko' Munro. 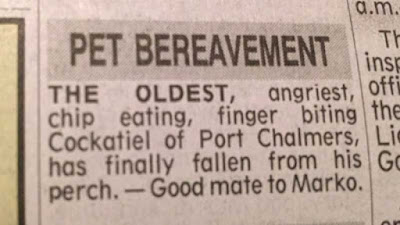 Munro said he was surprised by the gesture after farewelling Puffin, his feathered companion of the past 28 years, late last month. "It was a pretty sad day. He came out to see me, spread his wings and then made a funny clicking noise ... that was it. He defied the odds for so long I didn't believe he was dead."

Munro said it reminded him of the famous Monty Python Dead Parrot comedy sketch, but instead he was half expecting Puffin "to come back from the dead". "He was very stubborn and probably refused to lie down and die". The pet bird got his name after responding to Puffins featured on a nature documentary. 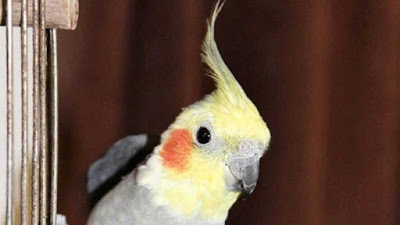 "I was calling him puffin and my girlfriend was calling him pretty cockatiel, and he came up with a hybridised version; pretty puffatiel. The bird outlived that relationship." Munro said Puffin loved surfing on top of curtains, pecking at cats/people, and stealing chips. Lots of chips. His house was quiet without Puffin, and he was forgetting he was gone and was still leaving out apple pips for him to eat. "He was a one of a kind."
Posted by arbroath at 6:03 am
Email ThisBlogThis!Share to TwitterShare to Facebook