An elderly lady from Worcester has been reunited with a lost eye belonging to her beloved, teddy bear more than 90 years after it went missing. Kathleen Piatt, who lives at Perry Manor Care Home, says she it is like a “miracle” the eye has been found for her 97-year-old bear. The 99-year-old was given the bear named Teddy by her parents Ernest and Beatrice when she was two years old, but later lost its eye while playing with a friend in 1925.

Miss Piatt, who is originally from Wallasey in Merseyside, remembered: “I didn’t see it happening but when I suddenly saw Teddy with one eye I sobbed – I didn’t cry, I sobbed!” As she grew older, Teddy was stored in the box room of her family home in Wallasey which was bombed in 1940 during World War Two. “Teddy was only feet away from where the fire bomb went through,” explained Miss Piatt, who was living in St Helens, near Liverpool, at the time. 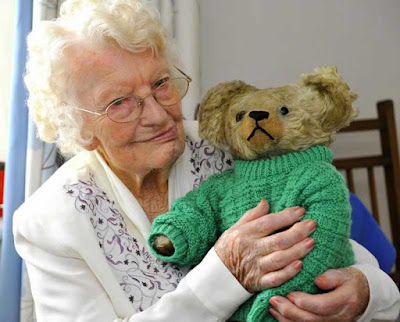 She continued: “A bombed out house which was on fire, Teddy survived all that, if only Teddy could tell the tale!” Incredibly, the tiny glass eye was discovered decades later by a close friend who was organising some of Miss Piatt’s belongings after her move to the home. A few weeks ago, the friend, Faith Jones, visited Miss Piatt and managed to restore Teddy’s full sight before triumphantly presenting him to his owner.

She said: “I knew she had got hold of Teddy and I just thought to myself, ‘Oh Faith found some knitting wool, she is knitting him some more socks - I just dismissed it. She came to me with Teddy and said: ‘Look at his face’, and I looked at his face and she had stuck the eye in there and then I just couldn’t believe it. It seems like a miracle.” Miss Piatt moved to Worcester 60 years ago, retiring in 1977. Just after her 99th birthday this year, she moved to Perry Manor Care Home. But in spite of the passing of time, she is just as fond of Teddy as she was 97 years ago. She said: “He is still the same, he is my Teddy that was given to me by my parents.”
Posted by arbroath at 6:01 am
Email ThisBlogThis!Share to TwitterShare to Facebook