An animal charity in Kensal Green, north west London, is again looking for a home for a waddling, quacking cat. Ten year old Jemima Puddleduck, who was born with a limb deformity in her front right leg, which she is able to walk on painlessly, has found her way back to the Mayhew Animal Home. 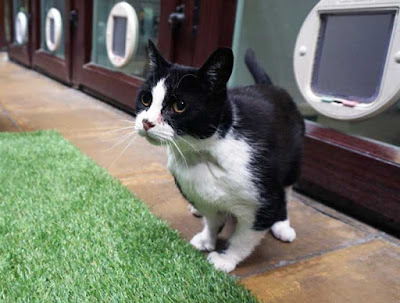 She first met the animal welfare officers two years ago when she was found living as a stray in someone’s garden. An instant hit with staff, her little waddle and meow made her sound like a duck, so they named her the famous Beatrix Potter character. Jemima was quickly adopted but her carer unexpectedly became ill two years later and was unable to care for her. She is now waiting to be third time lucky and find a loving home.

Matthew Pearson, The Mayhew’s cat adoption officer, said: “Jemima Puddleduck is such a special girl who will make a fantastic companion for that lucky person or family. She’s charismatic, friendly and absolutely loves company, and we would love to find her a loving forever home soon. Despite her leg deformity, Jemima can walk about and can even get up and down steps. As she gets older she may get a bit of arthritis in her other legs, but she’s gets around just fine.

Sadly you don't get to hear Jemima Puddleduck's meow.

“She can sometimes get a bit tired when she walks about, so it would be ideal if her new owners could provide her with plenty of spots to rest her paws.” He added: “We are looking to find Jemima a loving home where she will be the only pet. She can live with children who are used to cats and it would be ideal if her new owner had some outside space like a roof terrace or balcony as she loves to sprawl out and relax in the sun.”
Posted by arbroath at 6:02 am
Email ThisBlogThis!Share to TwitterShare to Facebook