Unhappy man whose door was smashed in by police says he isn't dead, he was just on holiday

A pensioner whose front door was smashed in by police over fears for his welfare has indignantly hit back, saying he was simply enjoying a summer break to the Balkans. Morris Hickey, of Chigwell, Essex, returned to find his home had been broken into during his five-week annual break in Croatia and Slovenia, resulting in around £1,000 worth of damage. 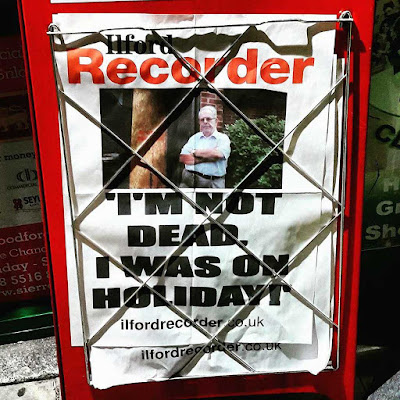 After the early morning break-in, officers boarded up his front door with chipboard and left it padlocked. But Mr Hickey insisted there was no reason to think anything had happened to him, and claimed police did not ask his immediate neighbours, who know he travels every summer, about his whereabouts. “There was an insufficient amount of evidence to suggest anything had happened to me,” he said.

“Isn’t it plain to anybody if somebody’s reported missing to knock on the neighbours’ doors and see what they know?” The angry holiday-maker said: “I wouldn’t lift a finger to help a policeman in the street now, in whatever circumstance whatsoever.” Insp Michiela Medcraft said the person who made the report had been concerned for Mr Hickey’s safety. 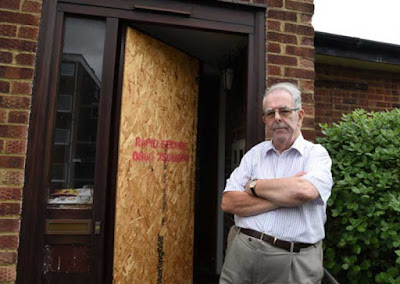 “The Metropolitan Police Service are always grateful for information from the community with their concerns,” she said. “In this instance the neighbours were extremely concerned and officers acted appropriately and within their powers to mitigate potential risk to another member of the community.” She also referred anyone wishing to claim for “lawful damage” caused during a police investigation to the Directorate of Legal Services.
Posted by arbroath at 6:00 am
Email ThisBlogThis!Share to TwitterShare to Facebook

You hear about those poor people found mummified --or worse-- in their homes because nobody missed them. You'd think he'd be happy someone requested a welfare check on him. Grumpy old bastard.

So now he has to go to the time, trouble and expense of filing a claim against the police, all because they were too lazy or stupid to check with the people who knew where he was - his immediate neighbours. Would that not have occurred to anyone with a modicum of intelligence? If only it was the people who couldn't be bothered to do their job properly who had to pay for this rather than the taxpayer, there would be some justice.