Man hunted by police for theft of a tattoo

Police are hunting a man who stole a tattoo. The theft happened at Gary's Tattoo Shop in Hull. The man went into the shop and agreed a fee of £60 for a tattoo. 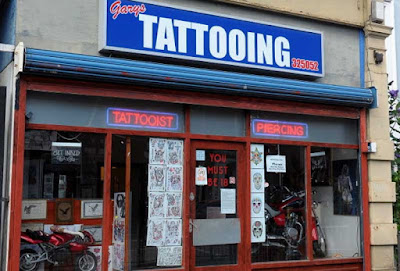 However, when the work was complete, the suspect ran out of the shop without paying. He then headed towards the city centre. A spokesman for Humberside Police said: "Officers are appealing for help in identifying a man who sat for a tattoo but left without paying.

"The theft happened shortly after 2.30pm on Friday, July 22, when the man engaged the services of Gary's Tattoo Shop, Beverley Road, Hull. He and the tattooist agreed a fee of £60, but when the work was complete the suspect ran out of the shop towards the city centre." 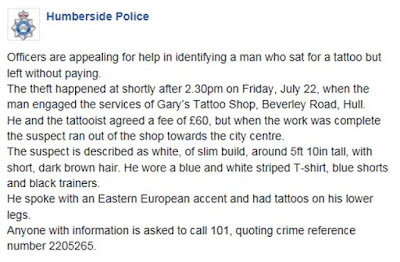 The suspect is described as white, of slim build, around 5ft 10in tall, with short, dark brown hair. He wore a blue and white striped T-shirt, blue shorts and black trainers. He spoke with an Eastern European accent and had tattoos on his lower legs. Anyone with information should call police.
Posted by arbroath at 6:01 am
Email ThisBlogThis!Share to TwitterShare to Facebook

Am I the only one who thinks that it would've made sense for the police to also describe the tattoo that was stolen?

Well, at least he has identifying marks!