A woman went to extreme lengths to steal mail in Albuquerque,New Mexico.

Authorities say they had been getting reports of mail not reaching its destination from two different post offices. In all instances surveillance video caught a Honda CR-V at the scene. 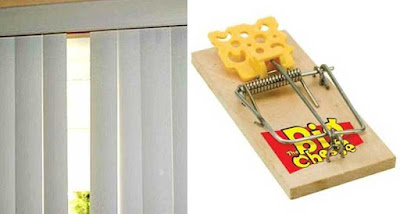 Authorities tracked down the car’s owner, Joann Bell, and eventually caught her in the act. They say she was literally fishing for mail, using a piece of a vertical blind with a rat trap attached to it.

She then fed it into the mailbox outside and stole the mail. Bell was arrested when authorities found her in her car asleep with the fishing device and several pieces of mail, some of which had already been opened.
Posted by arbroath at 6:07 am
Email ThisBlogThis!Share to TwitterShare to Facebook

Mail-stealing like this has always puzzled me. Unless you're going to try to forge a signature to a check, or hope to find some kid's birthday card with an enclosed 20 (dollars, or euros), what's the incentive? Can anyone explain?

Some people are just thieving "B*st*rds! Where is "The Unabomber" when you need him?

If the "rat" could snag a pre-proved creidt card offer, or driver's license, or some other form of ID...