When police confronted the "owner" of a house in the early hours of Saturday morning, they did not receive a warm welcome.

He told police in Banbridge, County Down, Northern Ireland, that he was a lawyer and was just clearing out his shed before telling police to "get out of my garden if you don't have a warrant". 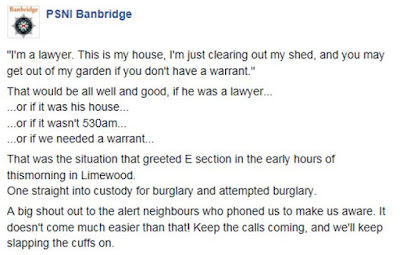 In a Facebook post, the Police Service of Northern Ireland in Banbridge said: "That would be well and good, if he was a lawyer or if it was his house or if it wasn't 05:30am or if we needed a warrant".

The man was arrested by officers for questioning about burglary and attempted burglary. "A big shout out to the alert neighbours who phoned us to make us aware," the Facebook posted added, "It doesn't come much easier than that! Keep the calls coming, and we'll keep slapping the cuffs on".
Posted by arbroath at 6:02 am
Email ThisBlogThis!Share to TwitterShare to Facebook