Motorists were left baffled when a Welsh road sign appeared in an English village last week.

The temporary road sign was discovered near Pilsdon Pen on the B3164, which runs between Broadwindsor and Marshwood in Dorset. 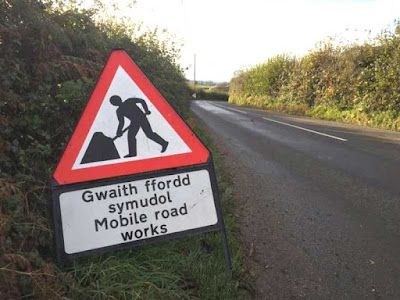 Although the sign appears in both languages, for most Dorset motorists the Welsh language is a mystery. And how it got there, approximately 70 miles from the Severn Bridge, is a mystery to the council too.

A spokesman for Dorset County Council said: “We have spoken to our sign shop, who produce signs for us, and they have not produced a Welsh sign. It is probably a private contractor carrying out roadworks in the area.”
Posted by arbroath at 6:01 am
Email ThisBlogThis!Share to TwitterShare to Facebook

They're just recycling a sign they used before in Wales.

When we were in Crete last time, we noticed that they started using deer crossing signs for their mountain goats. lol