A couple say they were "treated like animals" after being locked up for 20 hours when police wrongly accused them of stealing back the cash they had just spent on a second-hand campervan. Ben and Shelbea Finn, from Worcester, were shocked when police banged on their door and took them to the cells just hours after they had paid £3,600 for the campervan from an elderly seller in Gloucestershire. Their ordeal only came to an end when officers discovered the missing money in a fridge at the seller's home. Police have apologised for the ordeal and say they were acting on reports made 'in good faith' by the van seller's concerned daughter. But Mr and Mrs Finn have slammed the way police handled the situation, saying it has left them "traumatised". 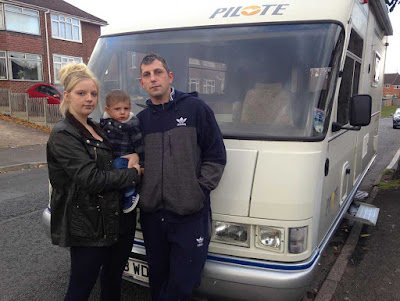 The couple, who have a one-year-old son called Archey, travelled to Newnham, near Gloucester, last Wednesday to buy the campervan, paying the elderly seller £3,600 in cash before returning to Worcester. But that evening after they had gone to bed, West Mercia Police officers - acting on request of Gloucestershire Constabulary - arrested them at their home. Mrs Finn, 22, said: "I'm hysterical because I have never, ever left my son. I have never been arrested or in trouble. They said 'you are both under arrest, we need to take you down to the police station and we are seizing your campervan.' My son was upstairs in bed. My mum and dad came down to help my son." Mr and Mrs Finn were first taken to cells in Worcester at around 10pm, but were transferred to Gloucester Police Station - arriving there at 5am the next day.

But it wasn't until about 5.30pm on Thursday that they were released without charge. Mrs Finn says they were kept in "dirty" cells at both police stations. "We have been treated like animals and my husband works so hard for everything we have," continued Mrs Finn. "No-one on that night made a good judgement." Mr Finn has since complained to police, saying officers should have used "compassion and discretion" in dealing with their case. "From the start, all of it could be avoided. They didn't need to traumatise my wife the way they did," he said. A spokesman for Gloucestershire Constabulary, said: "We received a report of several thousand pounds being stolen during the sale of a camper van. It was alleged that one of the buyers returned to the house after handing over the money to the seller and stole the cash back from a kitchen drawer. 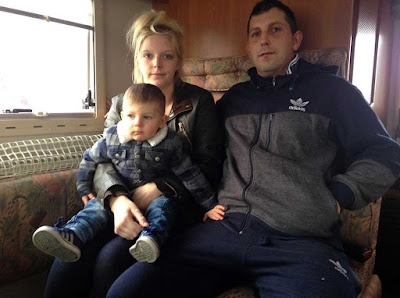 "The buyers were traced and arrested on suspicion of theft in order to allow officers to question them under caution, while the van was seized for examination. However during the interview process the missing cash was found by an officer in the seller’s fridge. We immediately released the two people in custody, apologised and drove them back home. We will also pay for the storage and recovery costs for the van. The report to police was made in good faith by the daughter of the seller and treated as the suspected distraction theft of a vulnerable elderly man, which we take very seriously. However we understand the distress caused to those who were arrested and would like to reiterate our apology." Both Gloucestershire and West Mercia Police say they have no recorded complaint from Mrs Finn about the cleanliness of the cells. Chief Inspector Mike Smith, head of custody, said: "West Mercia Police endeavour to provide high-quality custodial facilities, and we take seriously any allegation that our facilities have fallen below our normal high standards."
Posted by arbroath at 6:00 am
Email ThisBlogThis!Share to TwitterShare to Facebook