A video filmed by a drone has captured crossing the Mersea Island causeway in Essex at high tide. Island resident Craig Moorcroft, 39, flew his drone above The Strood, the road which connects the island with the mainland, during one of the highest tides of the year. Water levels reached 5.9m which left the road submerged, but that was not enough to stop some drivers trying to cross. 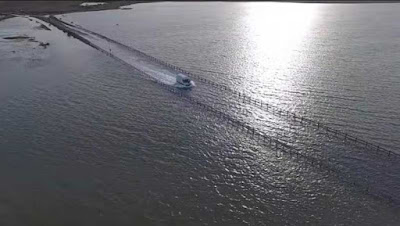 The fire brigade and coastguard had to wade out to save two people from their broken-down car. Mr Moorcroft spent half an hour filming at The Strood before posting the edited video online. He said: "It's just stupidity trying to drive through. The water was very deep that day. One week a month, the water can cover the road. It's a bit of a sore spot with Mersea residents - time and time again people try to drive through it. 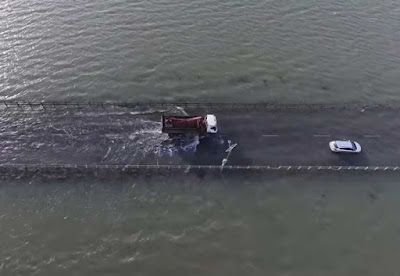 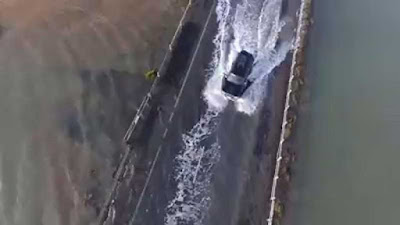 "The fire brigade and coastguards have to come out and it's frustrating their time is being wasted by people." A spokesman for the fire service said: “We were called to The Strood in West Mersea. One fire engine from Mersea was sent. A vehicle with two occupants was stranded on The Strood in the receding tide. We sent crews in wading outfits to help and the coastguard also attended. The occupants were rescued.”

Head of community safety at the fire service, Neil Fenwick, issued a warning to drivers trying to cross floodwater. He said: “Never drive into water which is deeper than the centre of your wheels. If you suspect the water could too deep, stop, get out and check and find a different route. Just 2ft of water is enough to make a car float and six inches in enough to reach most exhaust pipes which will stall the car.”
Posted by arbroath at 6:00 am
Email ThisBlogThis!Share to TwitterShare to Facebook

Water above your exhaust pipe will not stall your car

This is the absolutely very first time I see right here. I placed many satisfying things on your blog site, especially its conversation. From the deals of reviewing your fast evaluations, I think I am not the just one having all the pleasure below! Maintain the amazing.

It is one of the best site that I have visited. Hope you will share more quality blog posts thank you.

I Really Like Your Article, It is Written Well that I Want to Know. The Information of this Article is Really Good For Everyone. Hey By the Way I am a Writer Who Write the Article About IGNOU Exam Form So If You Check It and Give Your Valuable Review then It is Good For me.

IT WAS VERY WELL AUTHORED AND EASY TO UNDERSTAND YOUR BLOG, THANKS A LOT.
온라인섯다
섯다

YOUR BLOG GAVE US A USEFUL INFORMATION TO WORK. YOU HAVE DONE AN AMAZING JOB!
안전놀이터
토토사이트

I TRULLY APPRECIATE THIS POST. THIS POST WAS GIVEN TO ME A LOT OF GOOD THOUGHTS.
THANKS
성인웹툰
일본야동

THANK YOU FOR SHARING THIS KIND OF ARTICLE. IT MEANS A LOT TO ME!
안전놀이터
토토사이트