A giant wild cat is reportedly roaming in Great Alne, Warwickshire. Philip White, 39, claims to have spotted the animal in the field that backs onto his home, last Saturday. During the encounter he was able to film a few seconds of footage from his patio window and he claimed the animal was about 70 to 80 feet away from him. 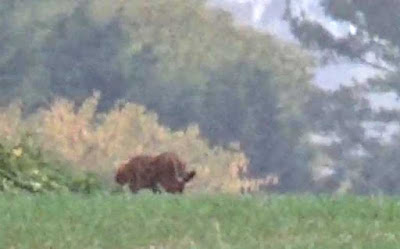 The video appears to show the creature turn around before making its way back into the bushes. He said: "I thought it was a deer. I saw it on the left and thought it was a deer then it was on the right -it moved quickly across the field- it was skulking around and that’s when I took the video. It was that tail," he said. "Much longer than a Muntjac deer- it couldn’t be a cat.

"There’s a black cat and when it is in the field you think it is a crow and when I looked up at this I thought it was a Munjac deer." Mr White said he was concerned for the safety of people in the village. He added: "I am worried for the children because they are more vulnerable. There are lots of families. There is actually a children’s playground nearby so the thought of that is quite concerning."

An animal, described as a large feline creature with leopard makings, was also spotted in Great Alne at 8.20am a few weeks earlier. The creature, which is thought to be larger than a fox, was reported by a resident to Alcester Police South Safer Neighbourhood Team. A further resident, Colin Wilks, aged 60, of Alcester, said he may have heard the creature growl whilst walking his dogs.

Update: Apparently the animal is a domestic family pet Bengal cat named Hiro, who lives just a few hundred yards away and regularly plays and hunts mice in the fields where the video was filmed.
Posted by arbroath at 6:00 am
Email ThisBlogThis!Share to TwitterShare to Facebook

I would like to thank you for giving this information. Those students worried about their assignment help to provide writing service contact them and resolve assignment-related issues.