Fox rescued after getting trapped in fence

Three veterinary ambulances ended up attending a urgent fox in distress in Eastbourne on Thursday eveniing. East Sussex Wildlife Rescue and Ambulance Service received a call just before 4pm to reports of a fox with its head trapped under a fence. Fearing the worse centre manager Chris Riddington rushed to the scene. Chris arrived on site first shortly followed by rescuer Tony Neads. They were greeted with a fox that looked as if his head was stuck underneath a fence, but as rescuers approached the fox's head disappeared. Confused as to why the fox who should now be free hadn't run away, Chris peered over the 6ft fence. 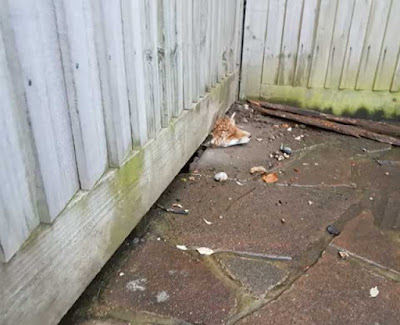 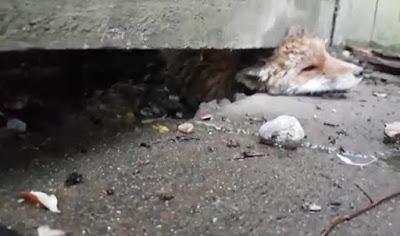 "I was really surprised when he didn't run off, but when I looked over the fence it became clear that he had got his leg stuck. I can only presume he had fallen and became stuck" said Chris. The fox had managed to get caught by his rear leg where two fences meet behind a shed. There was not much space for rescuer to attempt a rescue. Chris, who knew WRAS founder Trevor Weeks was in Eastbourne, called for additional assistance. Rescuer Tony used a dog grasper one side of the fence whilst Chris approached from the other. Using a metal bar, and force, they tried to free the fox but he was stuck. "It was so frustrating" said Tony, "we were so close to freeing him but we just couldn't move the fence apart far enough" he added. 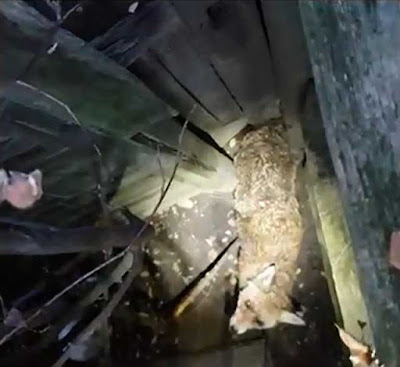 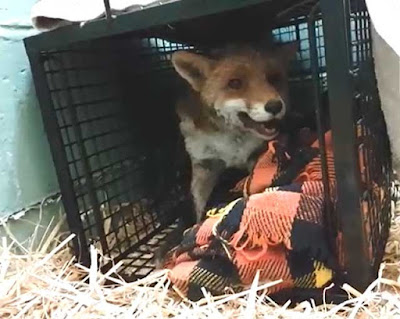 The team decided the only way would be to saw a part of the fence just enough to create a space to lift the leg out. Luckily the residents had everything that was required and Chris cut a wedge from the fence post. "The hardest thing was trying to work how to get the fox out from behind the shed without injuring the fox or getting bitten." said Chris. Trevor Weeks then arrived to advise and assist Chris in getting the fox out to safety. "When I arrived they had just freed the leg and were trying to work out the best way to remove him" explained Trevor, "I managed to squeeze down behind Chris and reaching over the top of him create a bandage muzzle to be enable us to safely rescue the fox" added Trevor.

After applying the bandage muzzle on the fox, Trevor and Chris were able to lift the fox up and along the back of the garage, squeezing through bushes and narrow gaps and a water butt to get the fox into a secure cage. The fox was then rushed back to East Sussex Wildlife Rescue and Ambulance Services hospital in Whitesmith where Trevor did a full examination. "The fox has had quite a lucky escape, there are no open wounds or obvious injuries at present. The fox does have an old healed fractured leg, whether this was the cause of the slip we do not know. We will have our vet assess the fox and we will keep him in now for 7 days to observe for any pressure necrosis that may arise from having his leg caught so tightly" explained Trevor. Hopefully the fox will go on to make a full recovery from his ordeal.
Posted by arbroath at 6:01 am
Email ThisBlogThis!Share to TwitterShare to Facebook