Police in Deal, New Jersey, said they arrested two men who took a taxi to burgle a house in town and then refused to pay the driver when they drove back to an apartment in Asbury Park with the stolen goods.

Kenneth Burke, 46, and Timothy Foote, 38, of Ocean Township, called for a taxi to a home in Deal on Friday night, said Deal police Sgt. Brian Egan. He said they instructed the taxi driver to wait outside. 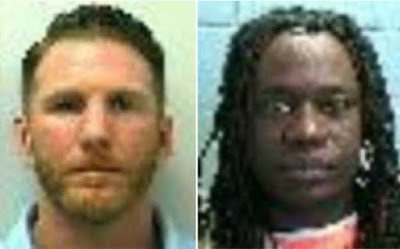 They then returned a short time later with a television set and some liquor bottles. He said the driver then took them to an apartment in Asbury Park, where they got out without paying the fare. The driver called Asbury Park police reporting the unpaid fare and the suspicious activity of the customers, Egan said.

After being alerted by Asbury Park police at 10:31pm, Deal officers checked the house and determined it had just been burgled, he said. Burke and Foote were charged with burglary, conspiracy to commit burglary, criminal trespass and theft. They were being held in the Monmouth County jail in Freehold on $20,000 bail each. The stolen items were returned to the homeowner, Egan said.
Posted by arbroath at 6:07 am
Email ThisBlogThis!Share to TwitterShare to Facebook