A pedestrian was hit by a deer that had been struck by a minivan in Clarksville, Tennessee, on Thursday evening.

At about 5:30pm, a Woodlawn woman was driving west in a 2004 Pontiac Montana when a deer entered the road, according to an accident report. 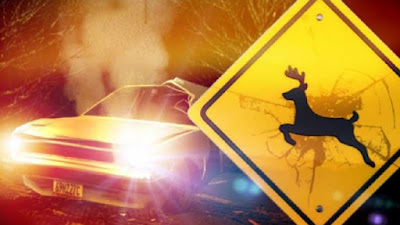 The minivan hit the deer, and the deer went airborne. "The deer flew off the car and hit a pedestrian," according to Clarksville Police spokeswoman Officer Natalie Hall.

The pedestrian had broken bones, and he was taken to Tennova Healthcare in Clarksville for treatment. "This is not a type of crash that happens often," Hall added.
Posted by arbroath at 6:03 am
Email ThisBlogThis!Share to TwitterShare to Facebook

Check out for the Latest Job for vacancies freshers along with live news at daana paani. pandemic with very few vacancies.

HEY THERE! I UNDERSTAND THIS IS SOMEWHAT OFF-TOPIC BUT I HAD TO ASK. DOES RUNNING A WELL-ESTABLISHED BLOG SUCH AS YOURS TAKE A LARGE AMOUNT OF WORK? I'M COMPLETELY NEW TO RUNNING A BLOG HOWEVER I DO WRITE IN MY DIARY DAILY.
I'D LIKE TO START A BLOG SO I CAN EASILY SHARE MY EXPERIENCE AND FEELINGS ONLINE.
PLEASE LET ME KNOW IF YOU HAVE ANY KIND OF SUGGESTIONS OR TIPS FOR BRAND NEW ASPIRING BLOGGERS.
APPRECIATE IT!
온라인섯다

HI, JUST WANTED TO SAY, I LOVED THIS POST. IT WAS PRACTICAL.
IT'S AWESOME DESIGNED FOR ME TO HAVE A WEB SITE, WHICH IS HELPFUL DESIGNED FOR MY KNOWLEDGE.
KEEP ON POSTING!
안전놀이터

WITH YOUR GOOD WRITING SKILLS MAKES MANY PEOPLE FEEL HAPPY.
WITH A LOT OF WRITING, YOU ARE MOVED A LOT. HAVE A NICE DAY!
일본야동

HELLO, I ALSO HAVE A LOT OF INTERACTIONS WITH YOU, I WANT TO FEEL ALIVE AND BE HAPPY, SAYING THAT I WILL BE A GOOD FRIEND WITH YOU, AND I WILL BE VERY HAPPY TOO. I HOPE THERE ARE ALWAYS GOOD THINGS AND HAPPY DAYS. I ALWAYS CHEERED FOR YOU.
THANK YOU!
안전놀이터