Police are searching for thieves who stole a life-sized silverback gorilla statue from a business in Burton-on-Trent, East Staffordshire. The resin beast was on display in the car park of a furniture store when it was taken on Monday afternoon.

Officers believe the gorilla, which is well known to motorists who drive past the shop, was stolen sometime between 12.50pm and 4.45pm. Derek Johnson from the store said he was 'angry' to find the gorilla had gone. He said: " We've had it eight weeks. It was there at about 12:30pm but when I went to have look last night it had been poached. 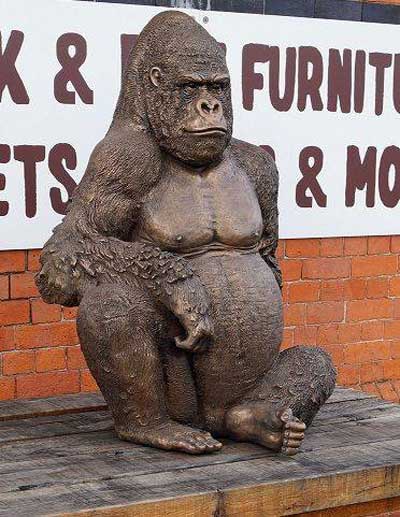 "I am very angry. I can't understand anyone who steals things, its just not in good people's nature and it seems to be just a few dubious character who spoil it for everybody. It is awkward for one person to carry it but it can be done." Inspector Bob Champeau, of Burton police, said: "It's life-sized so whoever took him would have struggled to get him in an ordinary car.

"It's also not the sort of thing that can be hidden easily so we're hoping someone may have seen something. His owners are keen to have him back as soon as possible so please, get in touch if you know anything." Anyone with any information or who has witnessed any monkey business is asked to contact police.
Posted by arbroath at 6:01 am
Email ThisBlogThis!Share to TwitterShare to Facebook