A row has broken out after a homeowner alleges that Colchester Council have stolen two inches of his land. Dave Smith, of Boxted, Essex, watched on as the boundary fence between his and the council house next door was replaced in July. But after closer inspection he noticed the workers had moved the fence closer to his property.

He has since been chasing Colchester Council to give him back the missing two inches and has now resorted to sending the council bills after he started the work himself. Mr Smith said: “It’s absolutely abysmal. People are just washing their hands of this situation. I am disgusted.” The original fence between the two properties was replaced in July because it was in a poor condition. Mr Smith went off to work one morning with the work due to start. 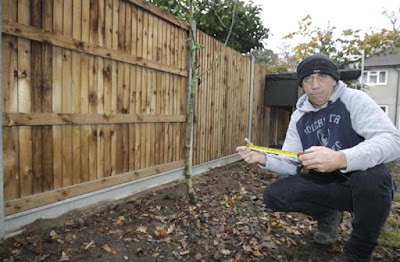 But when he got back that evening he noticed the new fence had moved onto his land. He immediately emailed the council to resolve the situation. When Mr Smith arrived home the following night the first post had been moved, but the fence was still on his land. Mr Smith said: “The council was presented with my photographic evidence and the excuses began. They ranged from a ‘few inches movement was acceptable’ to ‘it hadn’t moved very much’.

“The council at this point admitted that boundary disputes were very common after fencing contractors had replaced fences. How many other people have been faced with this situation?” Mr Smith has now replaced six of the fence panels and is planning on doing the rest after he had no reply to his letters. He has sent a bill for £250 to the council to pay. Mr Smith added: “It’s only a couple of inches, but it’s my couple of inches. I worked hard for that.” A Colchester Borough Homes spokesman said: “We are aware of the complaint from Mr Smith regarding fencing which we are investigating.”
Posted by arbroath at 6:02 am
Email ThisBlogThis!Share to TwitterShare to Facebook

Two inches? Get a grip, he probably got the fence between his property and his neighbours replaced for free and now he's quibbling about 2 inches and sending them bills. And he thinks he's in the right.

NO, He deserves HIS two inches! He pays his taxes, the government is SUPPOSE to WORK FOR HIM, NOT themselves! I say GOOD FOR HIM, Do NOT let them TAKE your two inches! They need to apologize publicly and PAY his bill. Excuse me people, you NEED to use your brain, YOUR government is NOT suppose to take your property! two inches or two feet it is YOUR property!

Ok, rip down the fence and tell him to build it himself and reclaim his two inches. That way, everyone's a winner. :-D