A street magician was left distraught after a drunken man threw one of his treasured props into the River Wear. Alfred Hill, 73, who wears a special balloon hat, was performing on Framwelgate Bridge, Durham City. A crowd of revellers, who had been celebrating a birthday approached Mr Hill and he asked one if he could try to remove a steel ring from the chain between the horseshoes. 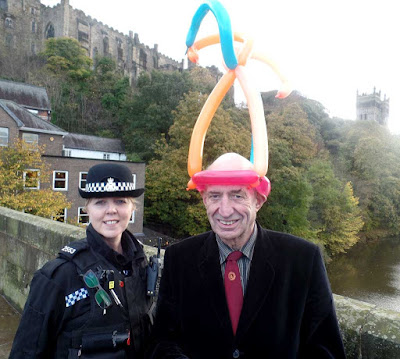 But instead of playing along, the man swore at Mr Hill and threw the metal puzzle into the river. Mr Hill was targeted shortly after 2.15pm on Saturday, October 1st. The puzzle, which he had owned for 30 years, involves trying remove a steel ring from a chain between two horseshoes without breaking the link. "It was very special, I paid £50 for it at a Blackpool Magic Convention, and I'm well known for using it.

"While I'm making balloon animals I hand it to people to try and solve," he said. "This man swore at me and threw it in the water and I burst into tears because I didn't know if I could get another one. I was very upset and five minutes later two of his friends came back and apologised for him saying it was his birthday and he was drunk. They gave me £50."

PC Jayne Marshall, of Durham Police, said the man was thought to be in his 30s, and smartly dressed in a blazer. She has also arranged for divers from Northumbria Police's marine unit to carry out a training exercise in the river to see if they can find the horseshoes puzzle. She said: "It is a heavy item so I am hoping it has just sunk and gone straight down where it was thrown in." Durham Police investigating the incident have released CCTV footage and are asking anyone with information about the man responsible to call them.
Posted by arbroath at 6:00 am
Email ThisBlogThis!Share to TwitterShare to Facebook

I hope netizens who the puzzle can make one for the magician or inform him where he can get one.