An Italian designer, who claimed €75,000 damages for repairs to a wall, turned out to be “merely a tenant” and not the owner of property she alleged had been damaged by tree roots, a judge in Ireland has said. Francesca De Cataldo, 39, in March last gave the Circuit Civil Court an undertaking not to cut down trees locally believed to have been planted on Killiney Hill, Co Dublin, to mark a visit to Ireland by Queen Victoria more than a century ago. On Tuesday Ms De Cataldo was in court to see her claims against Dunlaoghaire Rathdown County Council and Abberley Management Company Limited, thrown out by Judge Jacqueline Linnane. Ms De Cataldo was the applicant in two other damages claims in recent years. Back in December 2012, Ms De Cataldo, who allegedly slipped and injured herself at a petrol station, had her damages claim dismissed after a Judge found her account of events as "wholly unconvincing and unreliable." She had initially claimed for €83,000. And three years previous to that, Ms De Cataldo won more than €12,000 after she was hit by a falling frying pan in an Avoca store. In the most-recent case, barrister Francis Daly, counsel for Dunlaoghaire-based Abberley Management, had asked the court to dismiss De Cataldo’s claims on the basis they were vexatious, frivolous, without merit and an abuse of process. Liam O’Connell, counsel for Dunlaoghaire Rathdown County Council, said he was also asking for Ms De Cataldo’s proceedings to be struck out. He said her legal team had conceded that the local authority had no case to meet. Judge Linnane said Ms De Cataldo, of Duncan, Killiney, Co Dublin, had initially failed to inform the court that she was merely a tenant in the property and not the owner. She had in March sought to recover damages of more than €80,000 which had later been reduced to around €40,000 for damage allegedly caused to a wall on the property by the roots of the trees along a laneway. She had asked the court for an injunction seeking damages and directing the felling of the trees, proceedings in which she had failed and in which costs had been directed against her. Lyndsey Noonan, for the County Council, had told the court that Ms De Cataldo had expressly pleaded that the property belonged to her and that she and her family resided there. It had since been proven she did not own the dwelling or the perimeter wall. De Cataldo told the court she had lived in “Duncan” since January 2005 and since then had managed the property on behalf of her landlady for whom she acted as agent whenever maintenance needed to be done. She said she included a claim for repair of the boundary wall becaquse she intended to have it repaired on behalf of her landlady. She was now withdrawing that claim without prejudice to her landlady’s entitlement to bring a claim. Judge Linnane, refusing an application to further adjourn De Cataldo’s proceedings, dismissed De Cataldo’s claim, with costs, against Abberley and struck out her claim against the County Council, also with costs. The judge said the court had been “quite taken aback by Ms De Cataldo’s mode of operating” and had received an undertaking that her felling of the trees would not be proceeded with. The court refused Mr Daly to grant Abberley an Isaac Wunder order restraining Ms De Cataldo from instituting further proceedings against the company without prior approval of the court. In the 2012 case, Mr Justice Iarfhlaith O'Neill was satisfied to dismiss Ms De Cataldo's claim that she suffered a serious injury to her left pelvis, hip, and sacrum area as a result of her fall.

Ms De Cataldo sued Petro Gas Group Ltd, Petro Gas Retail Ltd, Desdale Ltd arising out of an incident at the defendant’s petrol station Apple Green at Ballybrack, Co Dublin. She claimed she suffered injuries after slipping in a patch of oil on January 24, 2007, while returning to her jeep after paying for diesel in the garage's shop. She was then taken to Loughlinstown Hospital by ambulance. She also alleged she was out of work for three months and was unable to do various domestic activities for three years and required the assistance of a carer for three years. Ms De Cataldo also claimed that after her fall her plight was ignored by the garage staff, and that her personal possession were stolen, before being returned to her. The claims were denied. Handing down judgement in December 2012, the judge said he was satisfied Ms De Cataldo did not slip on oil at the location claimed. It was extremely unlikely any oil was spilt at the garage, said the Judge adding that her account of events was “completely unreliable.” “I simply do not believe that a number of her personal possessions were stolen and then miraculously returned to her,” said the Judge. The Judge further rejected her claim that following her alleged slip she was left lying in the rain without any covering being offered to her by staff at the garage. He was satisfied that staff had provided her with a jacket, and that an ambulance was called in a timely fashion. The Judge said it “was apparent from all the medical reports” that her claim she had developed a serious condition in her left foot that causes her pain and inhibits her walking was “untrue” The Judge also described her claims for €73,000 for the cost of employing carers and nursing assistants and €10,000 for oils and preparations, which the Judge noted "were abandoned late in the day" were "completely without merit or justification." 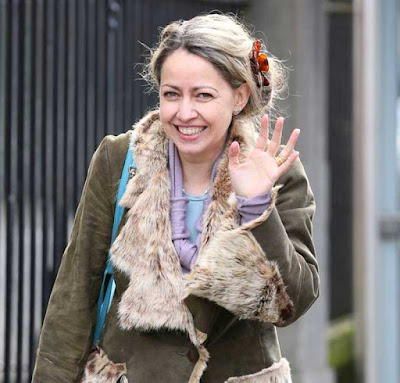 In December 2009, Ms De Cataldo told Dublin's Circuit Civil Court she had been struck on the back of her head by a metal frying pan, which had fallen two floors down a stairwell. She said the pan and a stuffed teddy bear had been dislodged from display shelves which surrounded the spiral staircase she was climbing in the Avoca restaurant and shop in Dublin's Suffolk Street in June 2005. Ms De Cataldo told Circuit Court President, Mr Justice Matthew Deery, that the pan had been accompanied on its way down through the air by a teddy bear, but the toy had simply brushed her clothing. Barrister John Moher, outlining a €38,000 damages claim by Ms De Cataldo against Avoca Handweavers Ltd, said she had been living in Ireland for seven years. She regularly shopped and dined in the Avoca store and was ascending the stairway when the pan and teddy bear had fallen on her. She had been brought to her knees by the blow and assisted by two members of staff. Ms De Cataldo told the court she had suffered headaches and stiffness in her neck and shoulders following the accident. As well as having treatment from her doctor she had to have physiotherapy for several months. She had also suffered from light-headedness, feelings of nausea and vomiting and sleeplessness. Ms De Cataldo burst out laughing and asked "Are you for real?" when shown a small glove-sized knitted stuffed duck replica, which defence counsel said was similar to what had struck her. Shop security man Damian Foy told Mr Moher he did not know what had fallen and he was not aware of any member of staff having witnessed the accident. Awarding Ms De Cataldo €12,240 damages, Judge Deery said he was satisfied she had been hit on the head in rapid succession by a metal pan and a stuffed toy.
Posted by arbroath at 6:03 am
Email ThisBlogThis!Share to TwitterShare to Facebook