A damaged car involved in a “collision” was left in a car park with a dead duck attached to its radiator grille. The vehicle was spotted in the car park off Princes Street in Dundee, Scotland, on Monday. 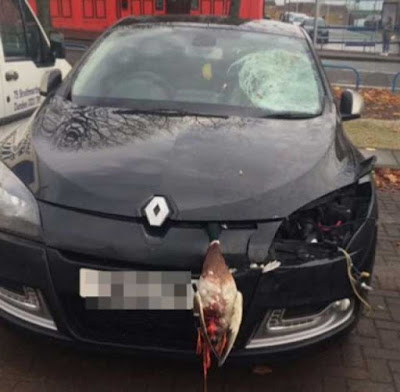 Exactly what kind of incident the Renault Megane was involved in remains unclear. Part of the windshield had been smashed, a headlight was removed and a bloodied duck was left hanging by its neck. Vikki Carr of Whitfield said that she got a shock when she saw the car with the bird on the front.

The 27-year-old said: “I was leafleting for my beauty salon and got the shock of my life. I couldn’t figure out what had happened. The windscreen of the car was smashed on one side and there was a headlight missing. Then strangest of all there was a dead duck stuck to the front of the car. 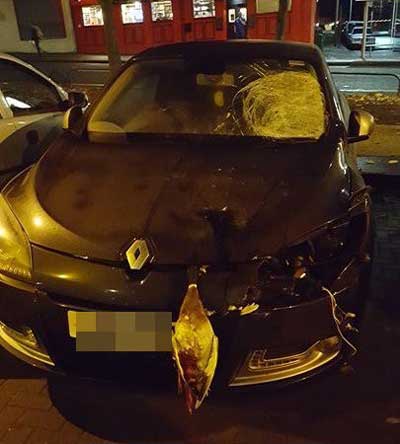 “It looked like something or someone had struck the side of the car but it didn’t tie in with the dead bird on the front. There was no glass or anything lying around beside the car which seemed very strange.” A spokeswoman for Police Scotland said: “It appears the vehicle was involved in some sort of collision. Officers have managed to trace the registered keeper of the vehicle to uplift it.”
Posted by arbroath at 6:02 am
Email ThisBlogThis!Share to TwitterShare to Facebook

The car hit two ducks. The first duck was a bit higher and that's the broken windshield. He bounced off, dead, into the morning gloom. The second duck broke the headlight with its body, and his extended head whipped into the crack of the hood and got stuck. Car driver kept on going, a bit shocked, and parked it in the car park. Elementary!