A 71-year-old retired art teacher, Jill Smith, used her sketching skills to help catch a thief who stole her handbag.

The grandmother was asked by police to describe the thief - but she did better than that by penning a remarkable likeness from memory. 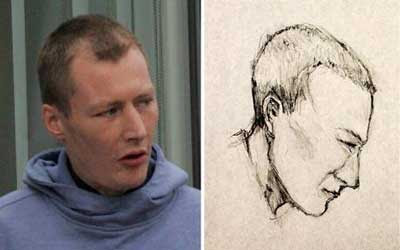 Talbot, a convicted criminal, was identified by police officers who saw the sketch, and was handed a suspended jail sentence at Gateshead Magistrates' Court on Monday.

Mrs Smith, who used to be paid to sketch people at the MetroCentre shopping mall, and who taught art for 18 years to prisoners, perfectly captured Talbot's nose which follows the angle of his forehead, his receding hairline and high cheekbones. It was such a good likeness that within two days fellow officers recognised him from the drawing.

Mrs Smith, who lives in Derwentside, County Durham, said: "He picked on the wrong person. It was hard luck on him really."
Posted by arbroath at 9:17 am
Email ThisBlogThis!Share to TwitterShare to Facebook