Fools own all hotels in Indian town

It may sound like a foolish business but tourism chiefs in a remote Indian town are no dummies after renaming all the local hotels after idiots. Until a few years ago the town of Giridih in India's eastern Jharkhand state had little to recommend it on the tourism map - but now hotels such as "The Idiot's Hotel" and "The World's Biggest Idiot's Hotel" are often packed as people turn up to stay at the business run by fools.

"We love to call ourselves fools. It's a great way to attract business," says Ashok Singh, the owner of the Bewkoof Hotel that translates into Fool's Hotel. He added: "My father named the hotel as a joke and suddenly loads of people started coming by to stay the night, now all the hotels in the town are using the same name. It's kind of a nice name, funny and quirky. It works for us," said Singh. 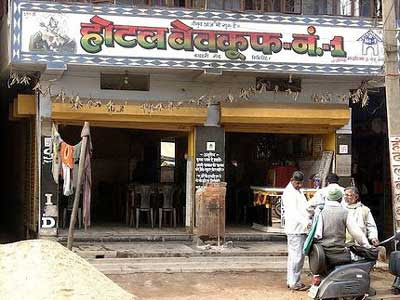 Michael Topno, who owns Maha Bewkoof Hotel that translates into Bigger Fool's Hotel, said: "This city has had these hotels for some time now and I think there is no need to change the name. It works for me, it works for those who come here. I like the surprise element in the name." The tradition is now so popular that even restaurants are cashing in with the "Idiots Bar" and "Idiot's Restaurant" among the most popular.

Avdesh Singh, 65, a local tailor said: "The first hotel ended up with all the customers and so everybody else joined in and then the trend caught on. To be honest, everyone makes their money out of it so no one minds being called a fool here."
Posted by arbroath at 7:09 am
Email ThisBlogThis!Share to TwitterShare to Facebook

Haha. This one gives me a really good laugh :)   thanks for sharing. Fools rule in India! I've had quite a day at work and this one's a real good way to wind down! Thanks for sharing! (Did I already say that?)