Police in Western Australia have charged a man who allegedly robbed a McDonald's restaurant wearing only blue underwear, wrapping his head and body in tea towels and toilet paper in an attempt to disguise himself.

Police allege Dalton Jeffrey Brittain, 20, walked into the McDonald's outlet in the southern Perth suburb of Spearwood armed with a six-inch-long knife. 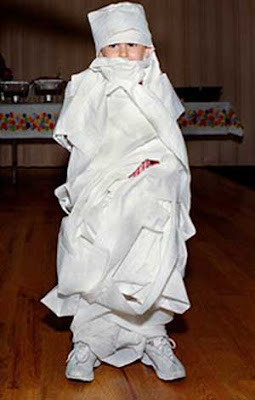 Tea towels were wrapped around his head and toilet paper around his body as he threatened at least two staff members and demanded cash, a court heard. Money was handed over before he fled on foot.

Brittain was later arrested and charged with one count of stealing with threats of violence. Magistrate Geoff Lawrence remanded him in custody and ordered him to be held in a hospital to undergo a mental health assessment. He was scheduled to return to court on April 6.
Posted by arbroath at 7:10 am
Email ThisBlogThis!Share to TwitterShare to Facebook

Robbery in poor-man's mummysuit....
Makes sence why he needed cash: To buy himself a better mummysuit.