Around 50 left-wing municipal officials dropped their trousers at Rome's city hall on Monday to call for the speedy passage of the Italian capital's 2010 budget.

"Alemanno has reduced us to our underwear," read one protester's poster, referring to the city's right-wing mayor Gianni Alemanno. 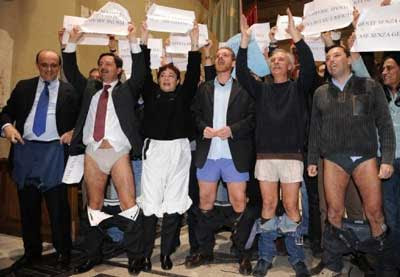 Sandro Medici, the mayor of Cinecitta, the home of the city's legendary movie studios, said Alemanno was dragging his feet over passing the budget "for electoral reasons, because it contains unpopular taxes."

"Without a budget, we only have funds for current expenses," said. "In my district, two schools that are supposed to open in September won't be able to operate."

Eleven of Rome's 19 districts are headed by left-wing mayors. Italy is set to hold elections in 13 of the country's 20 regions, including Rome's Lazio region, at the end of the month
Posted by arbroath at 7:05 am
Email ThisBlogThis!Share to TwitterShare to Facebook