A knife-wielding man was arrested earlier this week in what police called a meat massacre at a south-central Indiana supermarket. Several people called 911 on Wednesday morning to report a man with a knife in the Jay C Food Store. “We have a gentleman here cutting into the meat and throwing it onto the floor,” one caller said. "Got a man with a knife who's doing things,” another caller said.

When officers arrived, they found meat scattered everywhere in what Edinburgh police called one of the most bizarre cases they had ever investigated. Police said Anthony Coffman, 28, used a hunting knife to cut through meat packages, throwing open containers of raw beef on the floor. He then poured dog food over some of the meat in hopes of contaminating it so it couldn’t be sold, Edinburgh police Deputy Chief David Lutz said. 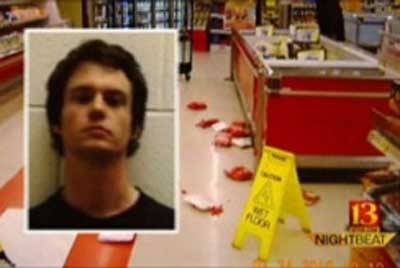 Coffman told police that he is a vegetarian and gets upset when others consume beef, telling the employee that God sent him to ruin the meat and that he was trying to save little girls from food he believes would make them “chubby.” "He thought if he could save one chubby girl, he's done his job," Lutz said.

Employees tackled Coffman outside the store and held him until police arrived. Coffman was taken to a hospital for a mental evaluation. He faces charges of criminal recklessness with a deadly weapon, criminal mischief and disorderly conduct.

With news video. There's another video on this page.
Posted by arbroath at 7:10 am
Email ThisBlogThis!Share to TwitterShare to Facebook

Well, if god told him to do it it must be OK

Why didn't he stab the chips 'n' dip?

Perhaps God told him he personally likes those particular cookies and chips and that those therefore are not to be destroyed?