South Korea has been heavily criticised for burying up to one million pigs alive as it grapples with a foot and mouth disease outbreak. Since the first case of the disease was confirmed in November the country has embarked on a mass cull. Foot and mouth disease affects all cloven hoofed animals such as pigs, cattle and goats, and any country that has cases of it is unable to export the animals' meat. 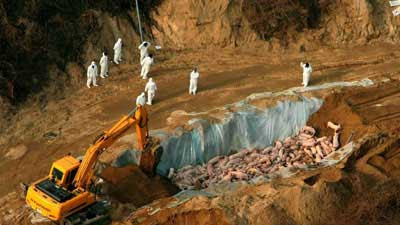 The South Korean government has so far refused to vaccinate pigs against the disease and is now slaughtering them in record numbers despite appeals to stop. On January 4 in one area of Gangwon-Do, 33,900 pigs alone were destroyed, according to the World Organisation for Animal Health (OIE). Compassion in World Farming (CIWF) said that South Korea's actions contravene international guidelines.

Michele Danan from the organisation said: "Live vaccinations are the best route but if they do have to kill them we would prefer that they were at least slaughtered humanely." The estimated cost of the cull so far is believed to have reached around £230m when a mass vaccination programme would have cost an estimated £63m. Some animal rights campaigners have criticised the government for putting economic considerations ahead of animal welfare. 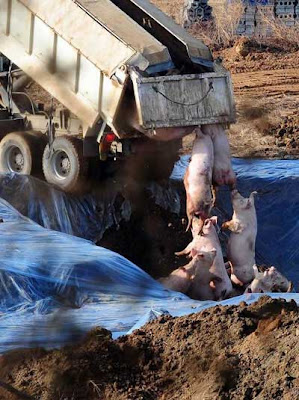 It is believed the live burial of pigs began at Christmas and the figure is likely to climb far above the one million mark. Joyce D’Silva, Director of Public Affairs for CIWF said: "Compassion in World Farming is appalled that the Republic of Korea is allegedly throwing pigs into pits and burying them alive. This is totally contrary to international guidelines on humane culling, which the Korean government endorsed five years ago. We urge the Korean government to end this horrendous practice at once and to ensure that, if animals are culled, this is done humanely."
Posted by arbroath at 8:02 am
Email ThisBlogThis!Share to TwitterShare to Facebook

That's just sick. Pigs are fairly intelligent, and these poor things are probably scared out of their minds.

If you can't be even the slightest bit humane about how you treat your animals, you should lose the right to eat meat. This is very telling about the moral conscience of these farmers.

When I was in Korea in the late 80s, the "scientific" view was that animals don't feel pain. Apparently, they haven't caught up to the rest of the modern world of science -- or compassion.

How horrible. Not that all animals bred for consumerism are treated that well in the UK, but this is yet another animal story I've read recently that I wish I hadn't and I won't easily forget.

KARMA will get those evil people,and after when desasters strike and lots of humans die from natural desasters people wonder why ! What goes arou7nd comes around. This is a horrible cruelty. Be burried alive ? OMG ! This planet is so totaly crazy & sick.