A disused gravel quarry became a playground for a young fun-loving fox and his family. This photograph, taken by British man Duncan Usher, shows how the clever four-month-old creature turned an old conveyor belt into a make-shift slide, before travelling down it twice.

Mr Usher photographed the amusing sight close to Bursfelde, a hamlet in the German countryside. The 56-year-old, orginally from Allendale, Northumberland, who now lives in Bursfelde, said: 'One morning I arrived at the quarry and saw from a distance two young foxes playing on the conveyor belt. 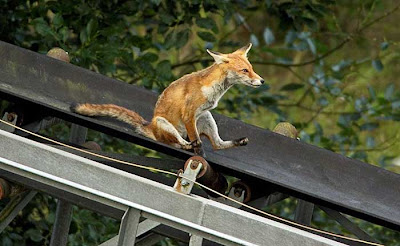 'They were attracted to the conveyer belt because it was a playground to them. I have not seen this type of behaviour amongst free living wild animals and I was really surprised and pleased to witness and capture this unusual event.'
Posted by arbroath at 6:01 am
Email ThisBlogThis!Share to TwitterShare to Facebook

That fox looks like he/she is having so much enjoyment.

Though it's a cute image, it could be trying to get rid of worms like dogs do when they scrape their arses along the carpet.

I agree with Ratz, but it's probably glands (which is why dogs do that, not worms)