Despite being blind from birth, Robert Ainsley-Raffel has never let his disabilities stop him achieving his ambitions. He is already well on the way to becoming a qualified plumber, and even trains his own greyhound. Now the 25-year-old from Hexham is training as an underwater diver. Robert passed his dive theory test with a flying 100% mark and is now looking forward to his first open water dives en route to a full Ocean Diver qualification.

Robert – who takes a white stick under water with him, saying that “it stops me banging my head” – is undaunted by his disability. He says: “I haven’t got a problem being blind – it’s other people that aren’t prepared to step outside the box and find a way around problems that I have the biggest trouble working with.” However, the British Sub-Aqua Club was happy to help when Robert applied to undertake a scuba diving course. 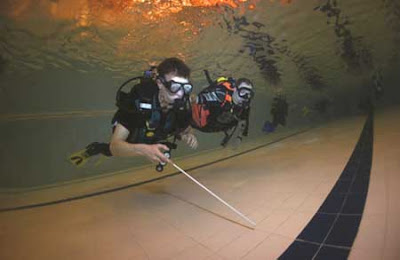 BSAC regional coach Dave Lucas accepted the challenge and says: “I did lots of Rob’s pool training with him, which was challenging and fun. The traditional methods of demonstration obviously have to be adapted for a blind diver. The solution was often a good briefing followed by a session where Rob was moved into the required positions like a life-sized action man until he realised what was required.” Robert said: “Right from the start Dave was prepared to give it a go and train me. Dave has been fantastic.

“Instead of putting up barriers, he took the attitude that we had to find a way around problems instead of just giving up and saying it can’t be done. The instructors from Cormeton, a BSAC school, and the regional coaching team taught me the theory side and I passed the exam with a 100% pass mark. The pool sessions were magic and, although I might have taken a bit longer to get things worked out, I had no trouble getting everything sorted.” Robert said: “I was born blind. Basically I didn’t have any retinas in my eyes so that was that.” Mary Tetley, chief executive of BSAC, said: “Robert is a remarkable individual who is an inspiration to us all.”
Posted by arbroath at 6:02 am
Email ThisBlogThis!Share to TwitterShare to Facebook

I am fond of scuba diving.Really nice posting , I will keep visiting your blog for next update. Diving Philippines

Snorkeling is an amazing adventure! Whether you're a beginner or an experienced Snorkeler, having the right Snorkeling Gear makes all the difference. Divers Supply offers the best Snorkeling Equipment and Snorkeling Gear to ensure that your underwater journey will be safe, enjoyable, and exceptionally memorable. Our selection includes everything from pre-assembled Snorkel setups to individual items so you can purchase only what you need. Shop with us today and experience the highest level of Snorkeling adventures!