Desperate race to save horse stuck up to neck in mud

It was a race against the tide. For more than three hours, show horse Astro was stuck neck deep in thick mud at Avalon Beach on Corio Bay in Victoria, Australia as the tide inched closer. Rescue crews first tried to pull the 18-year-old, 500kg horse free with fire hoses, and then a winch before a vet turned up to sedate Astro and pull him clear with a tractor. They knew they only had until 5pm, after which time the rising tide would have completely submerged Astro, drowning him. But within minutes of the waters rising around him, Astro was being dragged up on to solid ground slowly but surely, the team filthy but ecstatic. 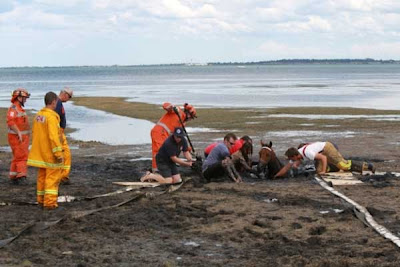 What started off as just another ride along the beach for owner Nicole Graham and her daughter Paris, 7, turned into disaster just after noon when their horses were both sucked down into the mud. Even though she sunk up to her waist in thick, smelly muck, Ms Graham refused to leave Astro's side until he was free. "It was terrifying," she said. "We went straight down and under, there was mud everyone and every time I moved it sucked me back down, it wouldn't let us go." 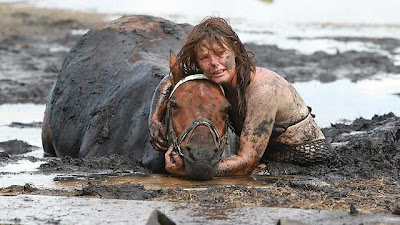 Ms Graham eventually crawled to Paris and together they managed to pull her smaller horse Emily out, even though she was stuck up to her chest. Paris then ran to the car and phoned 000. CFA First Lieutenant Roger Buckle called for warning signs along the popular horse beach. He said a pipe outlet trench caused the boggy section of beach to the right of the boat ramp and it was impossible to tell where it would give way. "We've pulled a few horses out before but never at a beach where it's like quicksand," Lieut Buckle said. 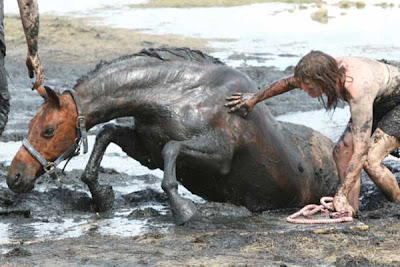 "The crews worked really hard and got straight in there with the horse. We ran a whole lot of different plans and finally Plan C worked. It was a race against the tide." Lieut Buckle said the rescue wouldn't have been possible without Ms Sullivan. Ms Sullivan said Astro was dehydrated but otherwise coped well. "A lot don't make it and I think without the owner there the chances (of survival) would have been a lot lower," she said.

With large photo gallery.
Posted by arbroath at 6:03 am
Email ThisBlogThis!Share to TwitterShare to Facebook

What a caring heart!