A driver with a "sexual anus plug in his rectum" was jailed after investigators say he rear-ended another driver and had more than five times the legal limit of alcohol in his blood, according to a recently released arrest affidavit. The incident happened at about 11:20 a.m. on Feb. 24 as Martin County Sheriff's investigators went to a two-vehicle crash in Hobe Sound. 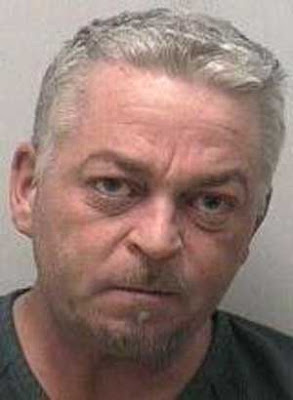 A deputy determined Kevin Brann, 41, had rear-ended another vehicle. Officials also determined Brann smelled strongly of alcohol. Brann's speech was slurred and mumbled, his eyes bloodshot and glassy. A deputy gave Brann, who'd urinated in his pants, field sobriety exercises before arresting him on a DUI with property damage charge. Brann "soiled himself" en route to the jail.

At the jail, investigators measured Brann's blood alcohol content at 0.409 and 0.412 - more than five times the legal limit of 0.08. Brann, of the 6800 block of Southeast Bunker Hill Drive in Hobe Sound, was arrested on a DUI with property damage charge.
Posted by arbroath at 6:04 am
Email ThisBlogThis!Share to TwitterShare to Facebook

"...an explanation of how it ended up in his bottom."

Who would be mystified by that?

Heh heh! You come up with the best headlines!

Every time I see this guy's mugshot I just keep thinking "41? Really?" Poor drunk bastard must have had a rough life.