A grieving animal lover has died after the dog lead he wore around his neck in tribute to his favourite pet got caught in the wheel of his moving car. Rob Emslie, 47, had been wearing his dead dog Sheevah's lead in a noose around his neck when he got into his 4x4 after a night out. He did not notice that, having slammed his car door shut, the tail end of the trailing lead remained outside the vehicle.

The plumber reversed. As he did so the nylon rope lead became entangled in one of the car's front wheel axles. The force snapped Mr Emslie's neck, killing him instantly. The accident took place in the early hours of Monday morning at the Butterfield Road restaurant near the Kragga Kamma nature reserve in South Africa's Eastern Cape region. 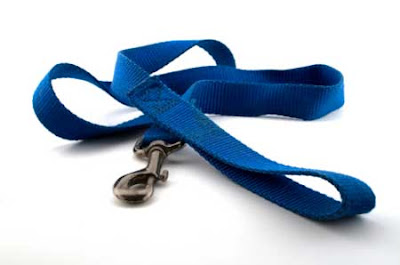 Carol Atterbury, owner of the Butterfield Road restaurant, was one of the first people to discover Mr Emslie's body after the fatal accident. "He came into the restaurant with this dog on a long three metre long rope lead which he had tied in a noose at the end," she said. "The dog was very well behaved and so he took it off the lead. As a joke, put it around his own neck, with the leash hanging behind him as if it were a tail.

"He had about ten glasses of wine and was the last to leave the restaurant at gone midnight on Sunday. We discovered his body the next morning." Mr Emslie's friend Andy Green told South Africa's Beeld newspaper that he had recently had his pet mongrel Sheevah put down and that he remained very upset about it. Mr Green said that his friend had worn his Sheevah's lead – which he also used for his replacement mongrel – around his neck "from time to time". Police captain Stanley Jarvis confirmed that police are not treating the incident as suspicious.
Posted by arbroath at 6:04 am
Email ThisBlogThis!Share to TwitterShare to Facebook

If the dog was called shiva (rather than sheevah) this would be rather apt as Shiva was the Hindu god of destruction and transformation.

That must be one long dog lead. Mine's less than a metre.