A supermarket on the German-Danish border was stormed by a horde of naked shoppers on Saturday after offering free groceries to the first hundred punters willing to get their kit off. 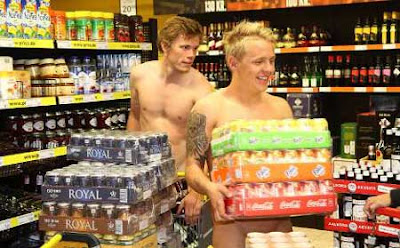 Police, photographers and a bemused manager witnessed strange scenes at a supermarket opening in Süderlügum, North Frisia as patrons wandered between the aisles studying shopping lists in nothing but their birthday suits. 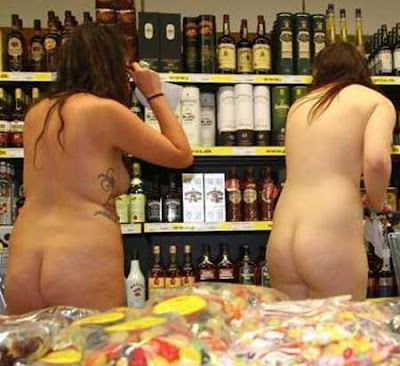 Customers had camped outside the new “Priss” supermarket in the hope of being among the lucky first hundred who had been promised a basket full of free groceries worth €270 if they came in the nude. Supermarket manager Nils Sterndorff was overwhelmed by the success of his gimmick.

“I never thought a hundred people would come, I thought maybe more like ten,” he said. In fact, so many turned up that Sterndorff had to let them in in batches of twenty. The police placed the number at 250, mostly Danish shoppers, who often take advantage of the cheaper alcohol and confectionary on the German side of the border.
Posted by arbroath at 6:01 am
Email ThisBlogThis!Share to TwitterShare to Facebook

I do not believe that America is the mostfree country any more. I hear of so mutch going on in other countries other than America. We don't get all the new stuff first. every day it seems like there is a new restriction on us.

You are right, Sunnylane. America has become more restrictive by the day. It will take not much short of a new civil war for American citizens to have success in taking back their country from the dictators.